Home » Mitch Daniels: Beware of the pandemic of second-guessing 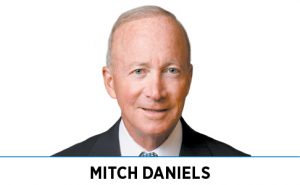 What follows is not a prediction. More of a precaution, based on a premonition. While I’m wearing out the prefix, let’s call it a preventive prescription.

I’m worried about preventing a sickness, one we’ve been through before—much more recently than the last pandemic flu. It’s our tribal eagerness to employ 20/20 rearview vision and castigate the Other Side for its mistakes, even those made in all sincerity, even those the second-guessers failed to dispute, or even endorsed, at the outset. Since everything these days seems to call for a snappy abbreviation, let’s use HRD, for Hindsight Recrimination Disorder.

In the first years of this century, the consensus conclusion of multiple national intelligence agencies was that Iraqi leader Saddam Hussein had or was close to acquiring weapons of mass destruction. Based on that “expert” information, the United States organized a large number of nations in a massive campaign to eliminate the threat, which proved unjustifiably expensive in both human and economic terms.

Because the intelligence was wrong. The WMDs weren’t real; they proved to be a dictator’s bluff. A reasonable postmortem would have been to review the performance of those who misread the information and try to learn lessons that might help us avoid repeating the error. Decision-makers of the time could have been criticized for not seeing through faulty data they had been given, without being trashed as liars or scoundrels pursuing personal agendas.

Of course, that’s not what happened. People who had examined the information and come to their own conclusion favoring military action developed a contortionist amnesia to denounce the exact viewpoint they had once held, or even voted for. Conspiracy theorists were permitted, even encouraged, to foment the slander that someone fabricated the inaccurate intelligence. Today’s poisonous, partisan atmosphere carries some of the toxins from the ugly Iraq War aftermath.

It’s easy to imagine the coronavirus producing the same potentially deadly symptom. None of us knows how this is going to turn out. It could be that the maximalist measures we’ve taken, with all their brutal consequences in lost jobs, dashed dreams, interrupted educations, second-order deaths—from forgone care, postponed surgeries, addiction relapses and suicides, you name it—will all prove warranted.

I, for one, hope so. I earnestly hope that our public officials, who are acting on the best (they believe) intelligence available to them, have chosen wisely. Because I think we pay a frightful societal price when we fail to establish social distance from HRD.

The conspiracists will have a lot of raw material to exploit. Even more than in the Iraq experience, it will be simple to identify special-interest motives and claim they drove a campaign that deceived the rest of us into an overreaction. Members of the public health community, underappreciated in normal times, have been handed a fabulous limelight opportunity. They’re not only on TV daily; they’re also calling the public-policy shots.

Heretofore-obscure politicians have also been handed plenty of airtime to pronounce on the pandemic. At least in the short term, they are “saving lives”—hard to be unpopular doing that. Of course, trading near-term benefits they collect for long-term costs someone else can deal with is what politicians do (#nationaldebt).

Most industries are taking a terrible beating, but the news media are suddenly on a roll, at least in audience. All those eyeballs stuck at home, and desperate for news about the virus that is the reason. There has been a lot of smart and responsible reporting but also a ton of the other kind: anecdotal, sensationalist, alarmist. The old print maxim, “If it bleeds, it leads,” now has its modern-day update, “If it’s sick, it clicks.”

Again, my hope is that what we’ve been doing will be fully vindicated. I want us to discover that this was the wisest course, that the ghastly price we’re paying was all worth it. But it’s the long term that matters. I can already hear the outcry claiming, “They lied to us.”

Sweden (Hey, wasn’t it just yesterday we were being lectured to admire and emulate its health care system?) has been criticized for a high per capita coronavirus death rate after declining to shut down its entire society. But what if, after a year or two, Sweden’s rate is far below ours, due to the herd immunity we are postponing? What if people as thoughtful as New York Times columnist Thomas Friedman have been right about protecting the most vulnerable without ruining the futures of millions?

Daniels, a Washington Post contributing columnist, is president of Purdue University and a former Indiana governor.

4 thoughts on “Mitch Daniels: Beware of the pandemic of second-guessing”