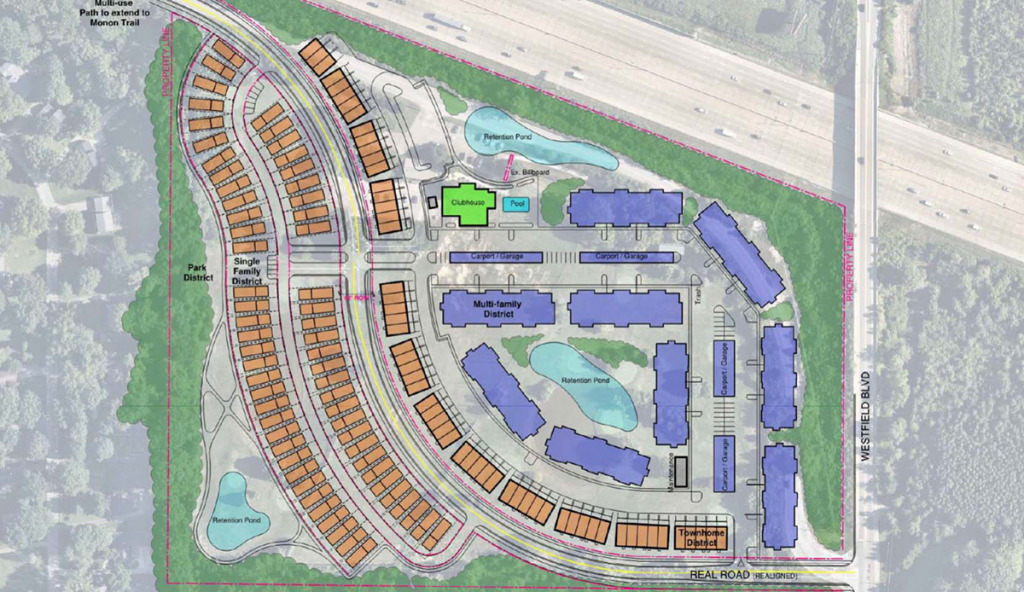 A preliminary concept plan for the Buckingham Cos. project. (Image courtesy of the city of Indianapolis)

An Indianapolis-based firm plans to redevelop a par-3 golf complex on the north side into an expansive residential district, complete with single-family homes, townhouses and hundreds of apartments.

Buckingham Cos. hopes to construct nearly 450 residences on a 25.5-acre property at 1775 E. 96th St., which is currently used by Shortee’s Golf Course. The development would sit just south of Interstate 465 and immediately west of Westfield Boulevard.

The project—development plans for which have been filed with the city’s Department of Metropolitan Development—would consist of 65 single-family homes, about 58 townhomes and up to 324 apartments, along with a multimodal trail and public park.

The proposed project was set for a zoning hearing Wednesday with the Metropolitan Development Commission. It has been postponed to Nov. 17.

Once farmland, the site has been home to Shortee’s since 2000.

Buckingham indicated in public filings it has the Shortee’s property under contract for the development, pending city approvals. The Metropolitan Development Commission must approve a request to rezone the property to a DP, planned development, from its current SU3 designation for a special use in a residential neighborhood.

The townhouses would be built across 13 three- or four-story buildings, with each unit containing a minimum living space of 1,800 square feet, according to filings. Each home would include a two-car rear-load garage, and it would have facades constructed largely of fiber cement panel, fiber cement lap, cast stone or a brick wainscot, with vinyl siding largely absent from the public-facing portions of the buildings.

The apartment units would be spread across nine buildings, either three or four stories in height. The apartments would have a dedicated clubhouse with a fitness center, outdoor swimming pool and lounge area, along with a coffee station.

The single-family homes would vary between one and two stories. They would have either attached or detached two-car garages and be constructed of similar materials to the townhouses.

As part of the project, Buckingham plans to deed about 2.75 acres along the western edge of the property to Indy Parks to create a public park and green space. The city has the option to decline the donation, in which case the park would be incorporated into the district as a common area that would be maintained by the three homeowners associations in the neighborhood.

The development would include three retention ponds. A timeline for the project has not yet been made public.

A representative for Buckingham did not return calls from IBJ requesting comment.

A similar project proposed by local developer Herman & Kittle Properties Inc. in 2015 failed to come to fruition. Dubbed Links at 96th, the $45 million apartment community was slated to contain nearly 400 units. Nearby homeowners objected to the plan due to traffic concerns and what they considered to be an excessively dense unit-per-acre ratio.