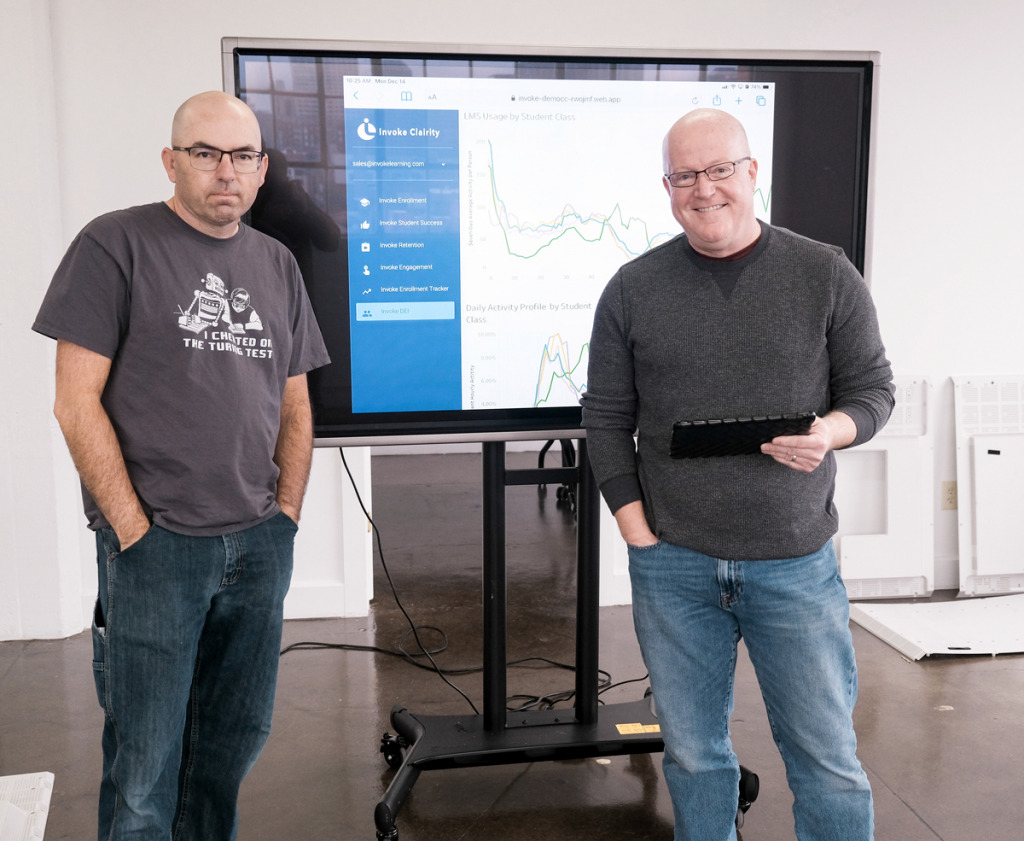 When academic struggles surface for a college student or group of students, most universities are eager to get them the help they need to succeed.

But an Indianapolis startup wants schools to act even before a problem becomes evident to administrators and guidance counselors working by traditional means—and possibly even before students start their first class.

With a deal with a major California college system and a partnership with Google expected to be signed early this year, the local educational-technology firm is building serious momentum.

Hensley spent eight years as Ivy Tech’s chief technology officer before leaving to start Invoke, and Aldrich served as chief data officer more than two years before departing to take the same post at California State University. In those jobs, the two realized many of the students’ challenges had to do with their lives outside of school.

“The data a school looks at is largely academic—attendance and grades and other activities within the school itself,” Hensley said. “Our approach is to better understand the person. There’s a lot that goes on outside the world of academia that has an impact on academic performance. If we can better understand the person, we can be proactive in getting them the support they need to succeed in the classroom.”

“Schools use a very little bit of data to understand who a student is and what he needs and wants,” Aldrich said.

Invoke’s AI platform pulls in not only attendance, grades and academic background, but also data from all forms of social media, as well as government and other public data. That could include marriage and divorce records, driving records, socioeconomic data and birth certificates—information Invoke uses to track whether students have children and even details such as when students log into and out of school computers and when they use their key cards to enter and exit buildings. Invoke even uses weather data and events from community calendars to better understand and predict students’ behaviors.

“There are so many data points we can use,” Hensley said. “Every click of data a student uses in a class, all messages posted on public forums about a class, any social media being used by institutions, websites visited while in that class, books checked out at the library, how often a student checks their grade, and on and on.”

The use of Zoom and other remote-learning platforms gives Invoke an even bigger school-generated data pool to mine.

“No company is doing what they’re doing on the same level,” said David D. Ulate, executive director of institutional research and planning at Foothill-De Anza Community College District in California, which became an Invoke customer last year. “What they’re doing is very innovative. They’re providing data and research we haven’t even thought about. They’re asking questions we hadn’t thought to ask.

“We [already] have a lot of data around student achievement,” he added. “Over time, we can see what is happening with trends.”

But Ulate said colleges haven’t had the capacity to answer the question of “why” a student is struggling or taking specific actions. “We can do some anecdotal why work, but it’s all anecdotal,” he said. “Invoke can really dig into that why.”

“What Invoke Learning is doing is definitely groundbreaking in terms of the speed they’re delivering this,” Williams said.

“Depending on the scope of the project, I’ve seen some institutions talk about outputs and implementation in a year’s time,” he said. “I’ve seen that same or a similar implementation by Invoke in weeks. We’ve been blown away by what they can do.”

Hensley and Aldrich are confident their AI-driven analytical system can improve student achievement.

“We believe the impact on student performance and graduation rates will be very strong,” Hensley said.

“The schools using our system are getting insight they can’t get any other way,” he said. “We’re going to give them the opportunity to do far better than they ever have before.”

“We do all the development and design in-house,” he said.

Ulate, the California educator, said Aldrich and Hensley talked with him at length and customized the system to fit his school district’s needs.

Invoke can implement and operate a school’s system for a five- to six-figure annual price tag, Aldrich said.

“We think there’s real value to Invoke’s system,” Ulate said. “There are other analytics systems that are a lot more expensive. They can be cost-prohibitive.”

The level of insights Invoke can cull from individual students can sound a bit intrusive—and even creepy.

“It’s not to be intrusive,” Ulate said. “And it’s not designed to be at all punitive. This work is not so we can call an individual student to say, ‘Hey, I can see you are doing this and not doing that.’ It’s just to say, ‘Here’s a group of students we may want to do a check-in with.’ This is about support. It’s a light touch to make students aware the support is available to them.”

Invoke is looking for problems that crop up for categories of students and provides solutions to help them.

For instance, Invoke’s system might detect that students who use public transit to and from school have difficulty getting to morning classes or a certain professor’s office hours.

Or the system might divine that students with children drop out of certain majors or school entirely at a higher rate, noting the need for child care accommodations.

The system could notice a problem for students from a particular region or socioeconomic strata.

Schools have tried to track some of these factors in the past, but administrators told IBJ it can take months to cull the kinds of data and insights that help make programmatic changes needed to enhance the chances of student success.

Over time, schools using the Invoke system can predict challenges students or groups of students will have even before they start their first class at the school.

“Working with Invoke Learning has opened our eyes in terms of how we handle data and what can we do next,” Butler’s Williams said.

Williams met Hensley and Aldrich seven years ago through the local education-technology community.

“When Lige and Brendan paired, it was pretty obvious they were going to do something special,” Williams said.

Butler officials weren’t the only ones to notice the duo. Invoke Learning in 2020 caught the eye of executives at Google, who have been planning their own higher-education initiative. The two sides have been in talks for some time, and a partnership is expected to be announced soon. Aldrich described the deal as “a collaboration for strategic and marketing development.”

Despite interest from the tech giant, Hensley and Aldrich said they have no immediate plans to sell the firm.

This month, the duo expects to have 15 colleges signed on, with revenue this year “well into seven figures,” Aldrich said.

Currently, Invoke is focused on the college market, but Aldrich and Hensley said it could be applied to K-12 schools, too.

“Post-secondary education is where we see the most need right now, so that’s where are current focus is,” Aldrich said.

Working in the commercial sector taught the pair the value of gathering and analyzing data to better predict people’s needs and wants.

In addition to Ivy Tech, Hensley worked for Sprint, Michelin, Ralph Lauren and Lockheed Martin, as well as several startups.

At Ivy Tech, “we fell in love with education,” Hensley said. “We saw the sweeping impact on people’s lives it can have.”

In 2017, the duo won a prestigious Gartner Data & Analytics Excellence Award for Self-Service Analytics for their work at Ivy Tech.

Working for community colleges—which often have dropout rates of more than 65%—opened their eyes to the challenges students face in earning a degree.

“Invoke’s mission is to bring meaningful analysis to education decision-makers,” Hensley said. “Invoke’s solution is unique, incredibly fast and extremely powerful. … Thinking about what that can mean for countless students in Indiana and across the country is what energizes us.”•