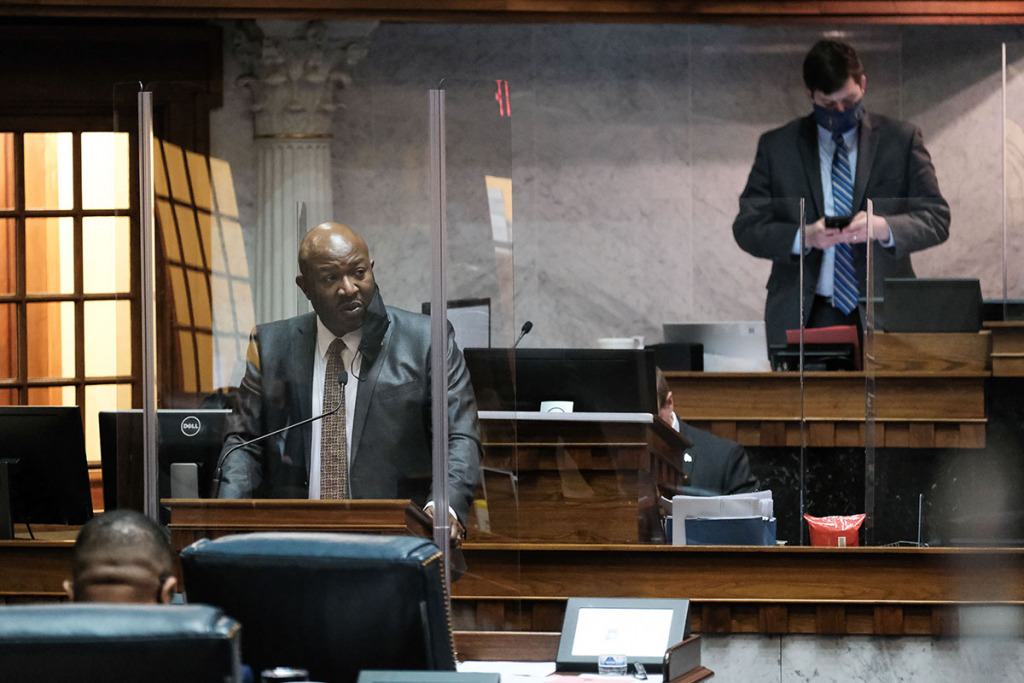 When 150 lawmakers—plus staff, lobbyists and media—returned to work in January in the middle of a pandemic, many wondered how long it would take before a temporary break would be necessary because of a COVID-19 outbreak.

But at the halfway point in the session, legislative leaders are breathing a sigh of relief about COVID-19.

That could be thanks to the flurry of changes made before the session, including relocating the House chamber from the Statehouse to a bigger room in the Government Center South building and the installation of plexiglass barriers around podiums in the House and Senate.

“If you would have asked me when we started on Jan. 4 if we would not have any COVID-related disruptions, I would have been very surprised to get to this point,” said House Speaker Todd Huston, R-Fishers.

That’s not to say no one has been sick. The number of cases is unknown, because the Legislature is not sharing that information with the public. Still, there hasn’t been an outbreak that required shutting the chambers down.

In fact, the only pause in legislative business occurred in mid-January, when Gov. Eric Holcomb closed the Statehouse out of concerns there might be violent protests related to the presidential inauguration in Washington, D.C.

Rep. Ed DeLaney, D-Indianapolis, said he knows of eight to 10 individuals in the Legislature who have been seriously ill with COVID-19, but the spread has stayed under control.

“We’ve been lucky that it hasn’t just been a massive event for all of us at once,” DeLaney said.

In the second half of the session, the Senate plans to take a step toward returning to normalcy by allowing testimony inside committee hearings—in the same rooms where members are meeting. Currently, members of the public testify in a separate room, with video piped in to the lawmakers.

Senate President Pro Tem Rodric Bray said he’s glad the Senate didn’t have a widespread outbreak, but its lawmakers and staff still need to be cognizant of the risks.

“We’re going to continue to try to be careful,” Bray said.

The House is not expected to make any changes to its protocols, but most committee hearings have been in either the House chamber or the temporary chamber in Government Center South, and those testifying have been allowed in the same room as committee members.

DeLaney said he hopes the second half of the session will go well, especially given that many members of the General Assembly meet the state’s age requirements for obtaining a COVID-19 vaccine.

But he said lawmakers have missed out this year because it’s been harder to converse with members of the opposite political party, as lawmakers tend to do when social distancing isn’t required.

“There’s been a price,” DeLaney said. “I think we paid a lesser price than I feared, and I thank the Lord. I’m happy about that.”

As lawmakers prepare for the second half of the session, here is where several key issues stand.

Republicans, generally speaking, have the same priorities for the next two-year spending plan—pass a balanced budget (which is constitutionally required) and maintain strong reserves.

But their views about how to spend the available dollars vary. Republicans in the House, for example, are pushing to significantly expand the availability of private-school vouchers by increasing the money allocated to the program from $174 million this school year to $256 million in two years.

And the House GOP also has a hefty list of grant programs it wants to fund, including $30 million for small businesses, $150 million for learning-loss programs and $50 million for health initiatives.

The House version of the budget also includes a cigarette tax increase—raising it from $1 to $1.50—although the boost is not nearly so high as advocates for raising the tax would like.

The House-drafted budget varied significantly from Holcomb’s proposal, which prioritized paying down debt and pension obligations over funding new grant programs. Also, Holcomb’s budget did not call for expanding vouchers.

“There’s places, yes, that we do disagree on the budget, but there’s places where, quite frankly, the House’s budget invested more than I was recommending, and I can see the validity in where they’re moving toward,” Holcomb said.

On the school voucher expansion, he said he supports giving parents the ability to choose where their child should be educated, but he also wants to increase funding for traditional K-12 education.

“We can do a couple things at the same time and meet parents where their demand is,” Holcomb said.

The budget and the bills that create the various grant programs and expand vouchers are headed to the Senate, where senators will have the opportunity to fold in their spending priorities.

Bray said his caucus will make some changes to the budget, specifically mentioning the cigarette tax increase.

Bray said he’s also concerned about the cost of the voucher expansion, but his caucus supports vouchers in general.

“We’re going to have lots of conversations about that,” he said.

Powers of the governor

The House and Senate have taken different approaches to curbing the governor’s executive powers during emergencies, and Holcomb has questioned whether the bills are constitutional.

SB 407 would limit the governor’s emergency orders to, at most, 60 days without approval from the Legislature to extend them beyond that. If lawmakers aren’t in session or the governor doesn’t call them into a special session, the orders would be limited to 45 days.

HB 1123 would create a new “emergency session,” which would allow lawmakers to convene at any time during a statewide emergency, without requiring the governor to initiate it. That bill would not limit the governor’s ability to extend emergency orders, but if lawmakers were in an emergency session, they could pass legislation to prevent the order.

Holcomb said he’s “unconvinced that the paths that we’re going down right now are constitutional.”

“I would prefer more conversation about both,” he said.

Bray and Huston have said they’re fairly confident the bills will pass constitutional muster, but neither is likely in its final format.

“It’s too early to tell where we will land there, but those conversations will continue in earnest so we can get something across the finish line,” Bray said.

The Senate has also passed legislation that would prevent the governor or the Indiana Election Commission from changing the time, date or manner of an election. Instead, that power would rest with the General Assembly.

Holcomb signed an executive order in March that postponed the date of Indiana’s primary election from May 5 to June 2 due to the pandemic.

The battle between the two ends of Market Street was fierce in the first half of the session, with a flurry of bills targeting Indianapolis.

That caught the attention of more than 60 Indianapolis business and not-for-profit leaders, who sent a letter to lawmakers urging them to stop trying to control the city. Lawmakers have moved some of those bills forward, while letting other proposals die.

One of the controversial bills that would have taken control of the Indianapolis Metropolitan Police Department from the mayor has died.

Another bill that initially would have created separate zoning boards for each township in Marion County has been tweaked to quash concerns. That piece of legislation now requires the existing Marion County zoning boards to have representation from the township where a project is being proposed.

But legislation that would threaten the future of the city’s mass transportation system passed the Senate on Feb. 23. SB 141 would withhold 10% of local income tax revenue from IndyGo until it meets a private fundraising threshold established in a 2014 law. It also would prevent IndyGo from moving forward with expansion projects, like the Blue and Purple Lines, until it secures private funding.

The bill’s author, Sen. Aaron Freeman, R-Indianapolis, pushed the same legislation last year, but that died without receiving a vote in the House on the last night of the session.

House lawmakers might not be as passionate about the issue as Freeman is, but that doesn’t mean it won’t get a vote this year.

“I just don’t see the same level of support or zeal to take on this issue in the House,” said Mark Fisher, Indy Chamber’s chief policy officer. “We’re going to continue to make the argument that transit is going to play a critical role in our ability to come out of the pandemic stronger.”

The Legislature also easily voted to overturn Holcomb’s veto of a 2020 bill that prevents local governments from regulating most aspects of the landlord-tenant relationship. That law preempts tenant protections the city of Indianapolis approved last year.

Lawmakers seemed to be off to a good start addressing law enforcement reform, as Rep. Greg Steuerwald, R-Avon, managed to get police officers, minority groups, Democrats and Republicans on board with HB 1006.

That was no small feat. The bill has a handful of potentially controversial provisions—it largely bans the use of chokeholds, penalizes officers for intentionally turning off body and vehicle cameras, makes it easier for the Indiana Law Enforcement Training Board to decertify bad-acting officers and expands the conditions for decertification.

It passed the House unanimously, with Steuerwald receiving a rare standing ovation after the vote.

Steuerwald said he hasn’t heard anything from senators who want to amend the bill.

“We’ve not had any in-depth conversations yet, but I believe the bill’s in good shape,” he said.

Bray said he expects the bill to be heard early in the second half of the session, and that it’s important its language remain intact.

However, tensions over race flared weeks after the House voted on HB 1006, as two Black Democratic lawmakers discussed a bill they say could discriminate against students of color in South Bend. Several Republicans—who believed they were being unfairly accused of racism—started booing and heckling Black lawmakers as they spoke.

The disruption continued out in the hallway where two lawmakers had to be restrained.

Afterward, Indiana Black Legislative Caucus Chairwoman Rep. Robin Shackleford, D-Indianapolis, renewed her request for all House members to go through implicit-bias training. She would also like the lawmakers involved in the disruption to be reprimanded.

Huston has yet to discipline any member or commit to the training.

“We’ll continue to have those conversations,” he said.

A controversial bill, authored by Republican Sen. Chris Garten of Charlestown, that would repeal state oversight of wetlands faces an uncertain future in the House.

If the bill passes, Indiana wetlands would still be regulated by the federal government under the Clean Water Act. But that oversight would apply to only about 20% of the state’s remaining wetlands, thanks to a change in the definition of wetlands by the Trump administration.

When asked by IBJ on Feb. 23, Huston said he had not formed an opinion on the bill.

“I have not spent any time looking at it,” he said.

While the Legislature would typically redraw legislative and congressional districts based on new population data before adjourning in April, that process has been postponed until the fall.

The U.S. Census Bureau typically provides the data to states by mid-March, but that has been pushed back to Sept. 30 this year, due to pandemic-related delays.

That means the Legislature will have to return for a special session in the fall.

State law says if lawmakers haven’t redrawn congressional lines by the end of the regular session, a five-member commission is responsible for handling the task, instead of the full General Assembly. But Huston and Bray have said they plan to pass a bill changing that requirement.•

One thought on “Finding consensus, struggling with conflict at legislative halfway mark”