Whether you’re an NFL team trying to make it to the Super Bowl or an investor who wants to generate better-than-average long-term results, your odds of success are greater if you ignore conventional wisdom and do things differently.

That’s the message from a recent article by Andrew Beaton in The Wall Street Journal headlined “The Surging Packers Are Exploiting One of the NFL’s Biggest Inefficiencies.” It explained how the team goes against the grain and why it’s no coincidence the Green Bay Packers are one of the final eight teams in the NFL playoffs. For full disclosure, I am one of the owners of the fan-owned franchise and anything but objective.

The article discussed the findings of “2nd and 1: What Should be the Most Valuable Play in Football,” a paper by Derek Horstmeyer, a George Mason University associate professor of finance. With the help of NFLsavant.com, Horstmeyer analyzed every play run on first, second and third downs, broken down by “long” (more than eight yards to go), “mid” (three to eight yards) and “short” (one to two yards), for all 32 teams over six seasons (2013-2018), a total of 195,746 plays.

According to classical economics, NFL coaches and investors are perfectly rational and capable of unemotionally analyzing all relevant data. In reality, humans are highly emotional and are influenced by all sorts of biases, which often lead to poor decisions that prevent them from reaching their goals, whether that’s making it to the Super Bowl or achieving long-term investment success.

In football, the offense’s objective is to move the ball at least 10 yards in four downs or fewer. Horstmeyer’s theory was that teams would act rationally to ramp up/down the risk of their play calling depending on the down and distance to the first down marker. In particular, coaches would take advantage of the most valuable option—to increase the risk and diversity in play calling—when faced with second down and short.

In other words, since second and short is a “free/no-risk” play (i.e. if it fails, you still have third and even fourth down to gain the one to two yards), teams should use this valuable option to pass (vs. run) deep (vs. shallow). Indeed, the empirical data showed teams that are more aggressive on second and short can expect to score 0.6 extra marginal point on a given drive, which can be the difference between winning and losing. 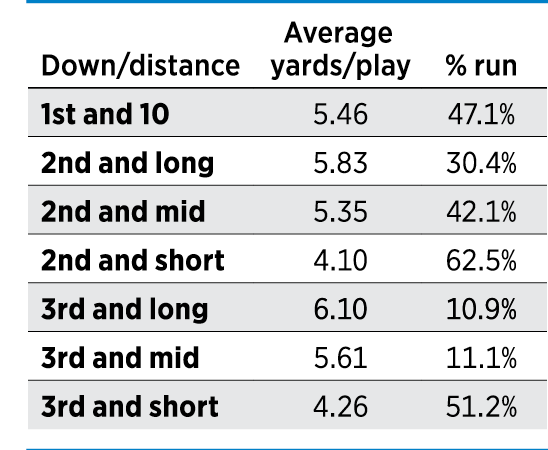 Instead, his table (at right) showed NFL teams actually run the ball the most on second and short, even more often than third and short, which is absurd.

Horstmeyer says “the prevailing wisdom among coaches is that ‘the fewer the number of yards to go, the more risk-averse we must be in the play we run.’” Decades of inefficiencies in NFL play calling can be attributed to the fact that “decision makers are aggressively conservative,” according to Beaton. That’s why it took so long for teams to understand their probability of success can be greater if they use all four downs on offense, not just three.

In the past decade, mindless and robotic passive “investing” strategies outperformed active, stock-picking managers at lower costs, so that’s where all the money went. I certainly “get” the simplistic marketing appeal of today’s conventional “wisdom.” However, I believe, like all prior investment fads, it won’t last forever and will be wrong for the decade ahead.

“Worldly wisdom teaches that it is better for reputation to fail conventionally than to succeed unconventionally,” wrote famed English economist John Maynard Keynes. Further, a successful investor must be “eccentric, unconventional, and rash in the eyes of average opinion.” The difficulty is that “if he is successful, that will only confirm the general belief in his rashness; and if in the short-run he is unsuccessful, which is very likely, he will not receive much mercy.” The same goes for NFL coaches.•