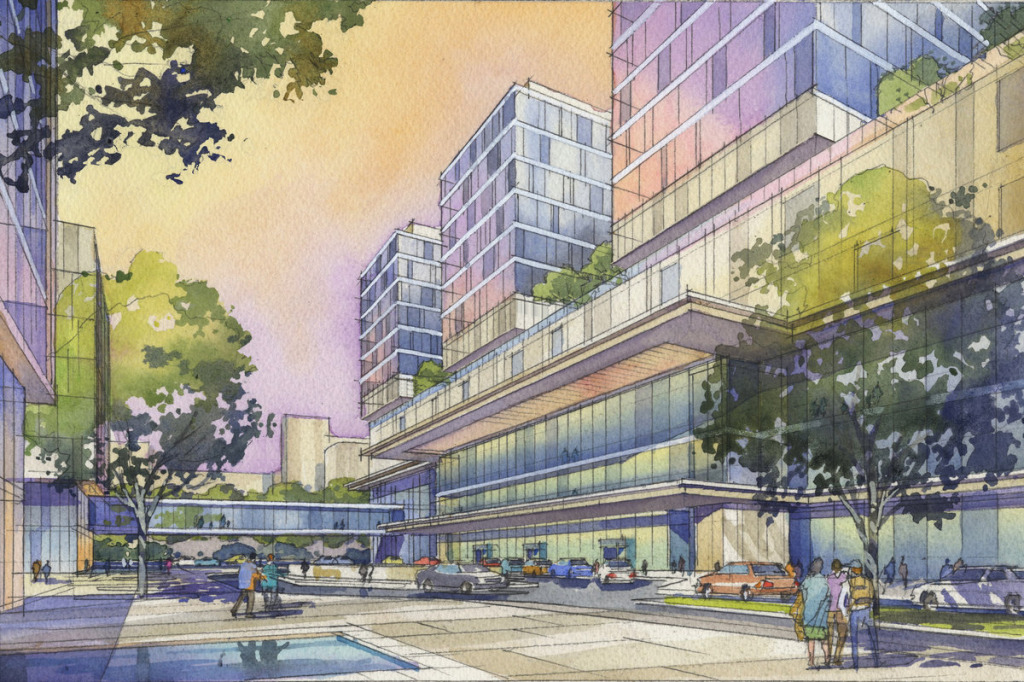 The proposed consolidated hospital will have three towers that will be 10 floors each. (Rendering courtesy of IU Health)

Indiana University Health, which announced five years ago that it planned to overhaul the Methodist Hospital campus, added a flourish when it finally revealed details this month.

The Indianapolis-based health care system said that it will buy up the properties it doesn’t already own scattered over eight blocks south of Methodist, a move that will add 44 acres to the campus, roughly doubling its size.

On the expanded campus, between 12th and 16th streets, IU Health plans to build a $1.6 billion hospital to consolidate operations of the current Methodist Hospital, which is more than a century old, and University Hospital, which sits 1-1/2 miles southwest on the IUPUI campus and is 50 years old.

The deal, however, will exacerbate a challenge already weighing on Marion County: huge swaths of land exempt from property taxes and off the tax rolls because they are owned by hospitals, educational institutions and other not-for-profits and are being used for purposes related to the groups’ missions.

A patchwork of businesses on the 44 acres—including insurance offices, a restaurant supply company, a trailer hitch distributor, and a maker of building mechanical systems—is currently paying about $247,000 a year in property taxes.

In addition, IU Health and its predecessor, Clarian Health Partners, already own 15 of the 27 parcels on the eight blocks. Because some do not have health-care-related uses, IU Health is ponying up more than $820,000 in annual property taxes—a tab likely to shrink once the land folds into the Methodist campus.

However, IU Health said the bulk of those taxes, $728,000, will continue to be due as a result of tax increment financing on portions of its five-story, 247,000-square-foot, $120 million neurosciences center, which opened in 2012. Other properties on the eight blocks, which now pay about $247,000 in property taxes, will be taken over by IU Health.

Some, such Johnson Controls, a maker of building mechanical systems, which owns a building at 1255 N. Senate Ave., will be allowed to stay at that location, at least temporarily. IU Health declined to say whether any private businesses would remain on the site once the expanded campus is up and running in 2026.

The campus expansion is likely to further fan the national debate over whether hospitals and other not-for-profits pay their fair share for city services in exchange for owning huge tracts of prime commercial land. The topic has long been a sore point for cities and towns across the United States that are trying to support schools, police departments and other essential functions.

Across Indiana, not-for-profit hospitals own more than 1,500 parcels of real estate, accounting for $3.2 billion in forgone property taxes, according to 2018 tax records compiled by the Indiana Department of Local Government Finance.

“When you see the amount of tax-exempt property that hospitals have, it’s obviously massive,” said Matthew Greller, CEO of Accelerate Indiana Municipalities, formerly known as the Indiana Association of Cities and Towns, which represents more than 400 local governments.

“In general, they are good corporate citizens. And they obviously bring amenities that I think that most cities and towns would relish having in their communities. But it’s very much a double-edged sword.”

Increasingly, cities and towns missing out on the property tax revenue have been requiring not-for-profits to ante up other kinds of payments.

A Franciscan Health orthopedic hospital being built on 18 acres of the Meridian Corridor will pay taxes when it opens, because it’s owned by a for-profit property division of Franciscan’s development partner, Methodist Sports Medicine. But a PILOT agreement with Carmel will kick in if the project is sold to a not-for-profit.

And Riverview Health agreed to make $150,000 in annual PILOT payments to Westfield for an outpatient center it built on prime commercial land.

IU Health is no stranger to the concept of making payments in lieu of taxes. In 2005, the system opened a 170-bed hospital in Carmel, at 116th and North Meridian streets. At the time, the hospital was owned partly by a physician group, giving it for-profit (and taxpaying) status. But city officials negotiated a PILOT agreement that would take effect if the hospital ever became tax-exempt, which it did. IU Health began making payments when that occurred.

Municipalities often seek the payments as part of rezoning proceedings.

As part of its campus expansion, IU Health has filed plans with the city of Indianapolis requesting a Central Business District special development classification that would provide zoning flexibility to develop the various uses for the 44-acre extension. The land is currently zoned for five uses, including residential and industrial. IU Health said it will work with city and state officials, neighborhood groups and other stakeholders on the design, specifications, uses and development standards for the site.

It’s unclear whether Indianapolis officials plan to seek any payments from IU Health.

“At the moment, the only development plans that have been submitted by IU Health relate to high-level zoning changes, and as a result, it is too early to speculate on the overall tax impact,” Mark Bode, a spokesman for the mayor, said in an email to IBJ.

“That being said, we look forward to learning more in the coming months about this significant investment in our downtown and the long-term benefits it will bring as a center of research and health.”

IU Health’s request for Central Business District zoning would require final approval from the City-County Council. Neither council President Vop Osili, a Democrat, nor the minority leader, Brian Mowery, a Republican, returned calls to IBJ to discuss the issue.

IU Health said in a statement that requiring hospitals to pay taxes or other payments “further increases the cost of providing health care services.”

The statement said IU Health already indirectly pays more than $3.5 million a year in property taxes in Marion County, for property that is mostly in the vicinity of Methodist Hospital. The hospital system said it calculated that by factoring in the large amount of space it leases for clinics, surgical centers and offices in buildings that are owned by for-profits. The property owners build tax payments into the leases, IU Health said.

IU Health estimated it will pay about $350,000 in property taxes on the eight-block expansion area now occupied by other businesses until the space is converted for medical use when the new hospital opens in 2026. “Then it’ll be exempt from taxes,” a spokesman said.

In Marion County, the not-for-profit sector as a whole—including churches, universities and charitable institutions—owns thousands of tax-exempt parcels accounting for tens of millions of dollars in forgone property taxes, according to local officials.

Hospitals and universities are “very visible” forms of not-for-profits that are tax-exempt, said Kirsten Gronbjerg, professor at the O’Neill School of Public and Environmental Affairs at Indiana University in Bloomington.

“Those properties are often thought to be very valuable because of the facilities included,” she said.

The main parcel of the current Methodist Hospital campus, for example, has an assessed value of $84.4 million and is 100% tax-exempt, according to the Marion County Treasurer’s Office.

If that land were owned by a for-profit commercial or industrial business, with a 3% property tax rate, Marion County coffers would take in an additional $2.3 million a year.

According to a survey in 2014 by the Indiana Advisory Commission on Intergovernmental Relations, about 60% of local governmental officials support payments or services in lieu of taxes for not-for-profit hospitals and universities. A smaller number, about 50%, support that approach for arts and culture, human service or religious not-for-profits.

The financial stakes are high. According to the U.S. Census Bureau, in 2012, Indiana property taxes accounted for 44% of revenue generated by 2,709 cities and towns, which is seen as critical funding for public safety, waste collection, social services and other services.

It’s often difficult for Hoosier municipalities to raise more money elsewhere when valuable property is taken off its tax rolls. That’s because Indiana in 2008 enshrined into the constitution property tax caps of 1% of gross assessed value for homeowners, 2% for rental and agricultural land, and 3% for commercial and personal property.

As of 2012, at least 218 localities in 28 states had implemented payments in lieu of taxes, totaling more than $92 million annually, according to the Lincoln Institute of Land Policy, a think tank based in Cambridge, Massachusetts.

Arranging such payments is complex and time-consuming process, and each deal must be individually, said Rhonda Cook, deputy director and general counsel of Accelerate Indiana Municipalities.

“In most cases, there really isn’t any leverage [for the cities],” she said. “It’s just whatever the two parties agree to.”

In recent years, Indiana lawmakers have considered bills that would make such payments easier or harder to implement. The only measure enacted, which passed in 2016, prohibits governments from imposing such payments on exempt property in a tax-increment-financing district. But it covers only properties that were exempt before the TIF’s formation, according to a 2019 study by Indiana Nonprofits Project, a joint venture between the Lilly Family School of Philanthropy at Indiana University and Indiana University O’Neill School of Public and Environmental Affairs.

IU Health’s project represents a huge investment in Center Township at a time many health care systems are launching construction projects in affluent suburbs with a greater percentage of patients on private, higher-paying insurance.

The current Methodist campus is a hodgepodge of buildings that have been stitched together over decades, with mismatched floor plates, uneven ceilings, and a conglomeration of electrical, mechanical and plumbing systems.

Some of the newest buildings—those that went up in the 1990s, including a 10-story patient tower known as A Building—house an expanded intensive care unit and likely will stay, officials said. Plans for the oldest parts of Methodist—buildings along Capitol Avenue that went up a century ago, known as B Building and C Building—have yet to be determined.

The expansion also will become home base for the Indiana University School of Medicine, which will move from the IUPUI campus, and will also house other research and support buildings.

IU Health said the brick-and-mortar investment it plans is just the latest evidence of its long-standing commitment to communities across the state.

Last year, IU Health created a community impact fund with $100 million that will make yearly grants to Indiana communities for housing, education and other so-called social determinants of health.

In addition, hospitals tend to be prized employers in any community, with highly paid health care professionals and the hefty payroll tax payments that go with them.

They also serve as magnets for other investment, such as the opening of restaurants, shops and housing in surrounding neighborhoods.

“Hospitals are pretty good corporate citizens,” Greller of Accelerate Indiana Municipalities said. “They want to be helpful to the community. They have amenities that most cities and towns would relish having in their communities.”•