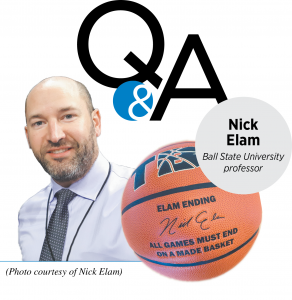 It’s been more than a dozen years since Nick Elam developed an idea meant to make basketball more exciting by discouraging late-game fouls and ensuring every game ends on a successful shot.

Now a 37-year-old Ball State University professor, Elam is about to see his idea—referred to as the Elam Ending—go prime time. On Feb. 16, the NBA will try it for the first time in its All-Star Game—and the league is bringing Elam to the game to see it in person.

What is the Elam Ending?

The idea in a nutshell is that you would play most of the game with a clock and you play the last part of the game without a clock. The idea is not to change basketball. In fact, it’s to do the opposite, to pursue a more natural style of play through the end of every game.

The aims of the format are to eliminate the stalling strategy that we see so often late in games … to eliminate some of these rushed and sloppy possessions that we so often see by trailing offenses, to provide greater hope for late comebacks and to provide memorable game-ending moments.

When did you come up with the idea?

The first time I had a viable idea that worked was in 2007. I thought, “OK, this is interesting. I want to explore this a little bit.” But I thought that, for sure, I would find some fatal flaw in the idea. But the more that I explored the idea, researched the idea, the more that I really started to believe in it.

It wasn’t until 2017 that someone finally took a chance on the idea and that was TBT—The Basketball Tournament—who [adopted] it on an experimental basis in 2017.

How will it work at the All-Star Game?

My favored format is—and this is what TBT does—that you would keep the clock all the way until the final minutes of the game and then you have an untimed final stretch. The NBA … is going to shut off the clock for the entire fourth quarter.

They’ll have 12-minute timed quarters for the first three quarters, but the fourth quarter will not have a clock at all. Whatever the score is at the end of the third quarter, they will add 24 to the leading team’s score, and that will be the target score [for the end of the game].

Let’s say, for example, at the end of the third quarter, the score is 120 to 110. Then for the fourth quarter, the first team to 144 wins the game—without a clock. They selected the number 24 in honor of Kobe Bryant.

This is not actually your field of study, right?

This has been, essentially, just kind of a side project all these years. My field of study, where I work, is in the Educational Leadership Department of Ball State University. We work to prepare aspiring school leaders and school administrators, and I really enjoy doing that.

Do you make money as these different organizations adopt the format?

I’m just like whoever invented the three-point line. I don’t think they get royalties every time Victor Oladipo drills one from downtown or anything like that. But my hope all along … would be that just being linked to this concept might lead to some sort of indirect benefit to me. Whether I gain enough credibility, or that I might get some exciting consulting opportunity, or some sort of public speaking or writing opportunity, who knows?•