Home » Tony Mason: Why a riot ‘is the language of the unheard’ 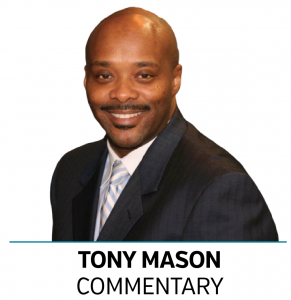 Many are familiar with a famous observation by Martin Luther King, Jr.: “… a riot is the language of the unheard.”

This quote, from Dr. Kings’ 1967 “The Other America” speech given at Stanford University, crystallizes what lies at the heart of the frustrations that have been aired both verbally and physically this past weekend in Indianapolis and across our nation.

Inequality is a reality Indianapolis. Inequality of employment, housing, education, health care and justice go unheard from generation to generation. What we are experiencing in our city, and cities across our country, is the language of pain when people’s spirits are broken and they move beyond hopelessness to outrage.

We shutter at the display of violence and the visible outcome of the broken glass and desecration of monuments, sidewalks and things deemed valuable by, and to, our community. Yet for decades, leaders have been willing to look past the visible scars of destruction and disparity of social injustice passed from generation to generation of people of color.

The scars of repeated history are the persistent victimization of blacks from Eric Garner, to Sandra Bland, to Ahmed Aubrey, to Breonna Taylor, to George Floyd, and from Michael Taylor to Aaron Bailey to Dreasjon Reed. Only the names change, but the outcomes remain the same.

Black men and black women die at the hands of law enforcement and rarely are the officers charged, prosecuted and convicted for their crimes, even though we witness them in real time.

Peaceful protests are a constitutional right and must be permitted to continue. However, those who are rioting, damaging property and looting should be held accountable—and so must our city hold officers of the law to the same level of accountability for its actions.

Now that this happened in our city, it will continue to happen unless things change.

The trauma of history a third of our community experiences daily from black unemployment rates that triple that of whites, to a lack of affordable housing, to under-resourced and under-performing schools, to persistent and growing health disparities, to a lack of investment in communities of color that breed and feed both the perception and reality of second-class citizenship for blacks in Marion County.

If you are born poor in Indianapolis, you are likely to die poor in Indianapolis. Indianapolis ranks near the bottom in social mobility. Marion County has the fourth highest rate of poverty in the state of Indiana at 19.8%, but the poverty rate for blacks is 28%. Since 2000, the home ownership rate for black households in Marion County has sharply declined to less than 40%. Black neighborhoods are being gentrified and blacks are being displaced.

Social justice is not just a concept. It is a commitment to creating a fair and equal society in which each individual matters, his or her rights are recognized and protected and decisions are made in ways that are fair and honest. Those we seek to help must be included in the process and their voices must be heard.

These problems of inequality not only exist in Indianapolis but they are pervasive throughout our state. They are not just problems for blacks and Latinos living in urban communities; these are the same problems being experienced by poor whites living in both urban and rural communities. The diversity of the protesters and the diversity of those who struggle to survive throughout our community and across our state should be notable to all.

While the COVID-19 virus prevents us from physically embracing at this time, it is more important than ever that we join together in understanding the impacts of the contagions of discrimination, racism, and inequality.

The leadership and citizenry of Indianapolis and the state of Indiana must recommit itself to being genuinely inclusive, broad-based and pro-active so that the language of pain from the excluded and unheard gives way to equity, true justice and humanity. This is our only choice and only way forward to a better place and quality of life for all.

Mason is president and CEO of the Indianapolis Urban League.

24 thoughts on “Tony Mason: Why a riot ‘is the language of the unheard’”