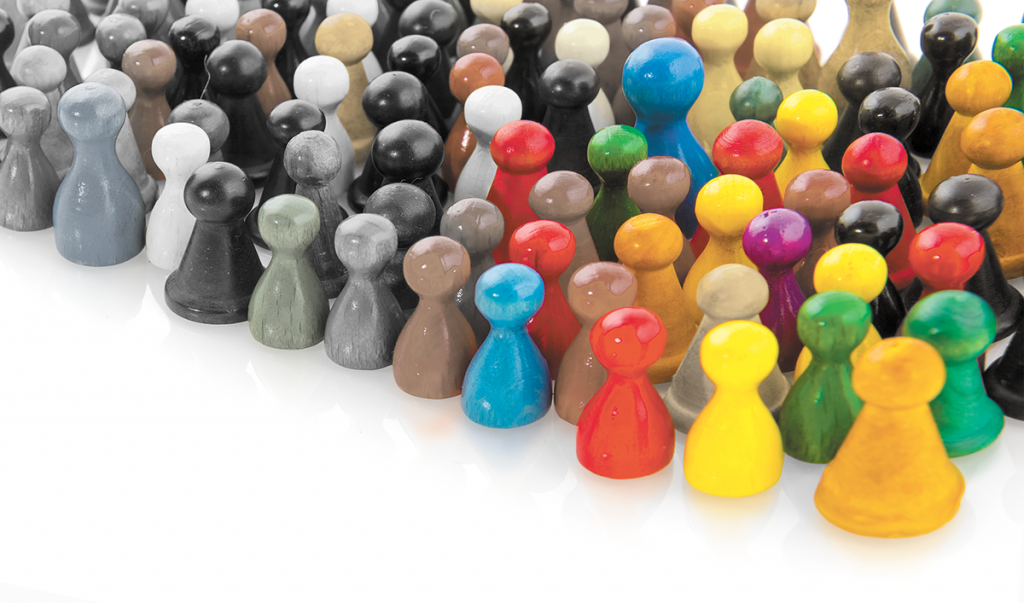 Four years ago, leaders at the Central Indiana Community Foundation and the Indianapolis Foundation recognized the need to diversify board members at local not-for-profits.

So they created a pilot program to place 10 individuals from varying races, ethnic backgrounds, ages and genders on 10 boards for three-year terms.

The goal was to create somewhat of a domino effect, in which not-for-profits would recognize the benefits of having diverse board members and continue to fill these leadership roles with more minorities.

So, did it work? Anecdotally, it appears yes.

Of the 10 not-for-profits involved with the pilot:

“I think it was successful in getting diversity on some of the big boards in Indianapolis,” said Tamara Winfrey-Harris, vice president of community leadership and effective philanthropy with CICF. “But it’s not a problem that’s going to be solved in three years. We definitely think it is an issue worth our continued focus.”

Winfrey-Harris said the decrease at CICF can be attributed to board terms ending and to turnover.

“We do continue to look for ways to add more diversity to the board,” she said.

All but one of the 10 participants—Sherron Rogers, vice president of business development, strategy and operational excellence at Eskenazi Health—remain on the boards they were assigned to.

Rogers, who served on Newfields’ board of trustees, said she was asked to serve again, but declined due to other commitments that had to take priority.

Despite the perceived success of the program, even those involved say it hasn’t solved the lack of board diversity.

“I think the fellowship was a great start and a great catalyst,” said Leadership Indianapolis President and CEO Rebecca Hutton, who served as a fellow on the IRT board. “You’re certainly not going to solve the problem by placing 10 people on 10 boards.”

Some of the same barriers that existed four years ago for minorities continue today. For example, not-for-profit boards often still expect a substantial financial commitment from members, which limits participation.

In the pilot program, The Indianapolis Foundation provided $10,000 to each fellow to meet the commitment.

“In some cases, the focus is more on the treasure, which keeps a lot of people off of boards,” Winfrey-Harris said. “Is there a way that people can contribute without coming to the table with thousands of dollars?”

Another persistent problem is that new board members are often recruited from the social circles of existing board members. If the board doesn’t have a diverse network, the candidates won’t be diverse.

“The best, most creative organizations and forward-thinking organizations are those where people aren’t the same,” Rogers said. “That mix provides a really special sauce and mix of ideas that really help to improve the organization.”

Minority leaders are optimistic that improvements will continue, as up-and-coming leaders are identified and as organizations in both the public and private sectors confront ongoing high-profile conversations about racial inequity.

“This is something that requires long-term, sustained, intentional work,” Rogers said. “Many organizations have started that work, and it will continue into the future.”

As for CICF’s role, Winfrey-Harris said the group is hoping to relaunch its board diversity program next year with help from Leadership Indianapolis.

“We didn’t want this to be, ‘Great, you had diversity, and now you don’t,’” Winfrey-Harris said.

Several of the individuals who were placed on boards in 2016 say they weren’t just given a seat at the table—they were heard.

“It was a really fantastic experience,” Hutton said. “I can’t say enough good things about the program.”

She said the IRT had already started working with a diversity consultant when she arrived, so the fellowship allowed her to be involved and understand more of the behind-the-scenes work of the arts group.

“It was a fresh voice, it was a younger voice, and it was a diverse voice,” Gahl said. “Her voice was quickly heard. She participated in a meaningful way.”

Slash, senior instructional designer for Community Health Network and president of The Exchange at the Indianapolis Urban League, said she initially thought being on the “Tourism Tomorrow” branch of the Visit Indy board was a minor position, but she quickly realized its importance.

She said she spoke up one day after seeing a marketing plan that put special focus on how to cater to kids visiting Indianapolis for youth sports or conventions, but did not target youth already in Indianapolis who might be interested in these same attractions. In the next version she saw, her suggestion to also cater to local youth had been taken, she said.

“I felt honored to even be in the space to say that,” Slash said.

More recently, Gahl said, Visit Indy leaders turned to Slash for advice on how to proceed in the wake of anti-police protests. He said they noticed that dozens of tourism organizations across the country hadn’t made any statements, but Visit Indy wanted to do something.

“We said, ‘We need your help. We need your guidance,’” Gahl said. “She helped us brainstorm and create meaningful content.”

Hutton said it’s important for boards to value minority members and support them; otherwise, the partnership won’t be successful.

If a not-for-profit board doesn’t treat the minority member as an equal, he or she might walk away.

For example, Ebony Chappel, program and communications manager for Leadership Indianapolis, said that happened to her in 2012 after she was recruited to join the board of a local arts organization.

She said she quickly realized she wasn’t there to give input—she was the token minority. She resigned in less than a year.

“I was a sweet young black girl that was very optimistic,” Chappel said. “I learned a lot in that situation.”

She serves on two different boards now, including the Indianapolis Press Club Foundation, where she is again the only Black board member. But she said it’s a better experience, because there have been meaningful conversations about how to add more diversity to the board and a paid fellowship was created to place an intern at the Indianapolis Recorder.

“It feels like a step in the right direction,” Chappel said.

So how can not-for-profits still struggling to diversify their boards make progress?

Una Osili, associate dean for research and international programs and the dean’s fellow for the Mays Institute on Diverse Philanthropy at the IU Lilly Family School of Philanthropy, said research has shown the organizations that see the most success are ones that make diversity a central part of their mission.

Gahl said increasing board diversity at Visit Indy has been a priority since 2011. In 2016, eight of 66 board members were racial minorities—or about 12%. Today, 12 of 67 board members are minorities—about 18%.

That commitment continues, he said. “We cannot afford to sit idle and become complacent.”

Hutton said Leadership Indianapolis’ has worked intentionally to establish a board that is majority-female and includes representation from people of color, immigrants and the LGBTQ community.

But even with a commitment to diversity, not-for-profits still sometimes don’t know where to find minority leaders, which sometimes leads to recruiting the same people to serve on several boards.

“Find new people and be willing to give new people opportunities,” Hutton said.

And don’t be turned off because people don’t have board experience.

“Most of the time, it’s not because they’re not capable or qualified,” she said. “It’s because they just don’t get asked.”

Hutton suggested that not-for-profit leaders reach out to organizations that are connected to minority populations or are involved with training minority leaders, such as Leadership Indianapolis.

“If we need to play matchmaker a little bit to make that happen, that seems like a role we can play,” she said.

But minority leaders stressed that not-for-profits need to build genuine and authentic relationships with potential board members—minorities shouldn’t be seen as ways to check a box.

“Relationships really matter,” Rogers said. “People want to be engaged for their talent, their skills, their ideas first.”

As for the financial barrier, Osili said not-for-profits should consider whether a potential board member who is unable to make a significant donation could instead connect the organization to other funding opportunities with grantmakers or companies.

“Diverse board members are going to bring a range of community connections and assets,” Osili said.

Slash said companies and not-for-profits could work together to solve the financial-commitment obstacle. For example, she said, the top executives from a company are often the ones asked to serve on boards because those individuals can write the bigger checks—but those people are often white.

Instead, Slash said, a lower-level employee could serve on a board and the company could commit to making the same donation the higher-ranking executive would have offered.

And, she added, it’s important for a board member to have the full backing of his or her company, in order to speak confidently about other support, like partnering on a program or providing some type of service that could be offered to the not-for-profit.

Slash also suggested that other board members at a not-for-profit could sponsor seats for minority board members by helping pay the financial commitment.

Once the minority board member is involved, experts say, it’s important that the not-for-profit value that person’s input and make them feel welcome.

“If they want this to be meaningful, they have to do more than just add that person,” Osili said. “Orientation matters.”

Charles Venable, director and CEO of Newfields, is trying to tear down the barriers to adding diversity to the art museum’s board of trustees through its recently created board of governors, which is designed to broaden the network of future board members.

“They’ll just be part of the family,” Venable said. “That’s the ecosystem we’re trying to create.”

Venable said the board of governors isn’t a typical “junior” board that some not-for-profits establish, because the one at Newfields has voting power, participates in meetings and is involved with committees.

He said Rogers, the fellow from the Indianapolis Foundation program, helped Newfields launch the new board and was a mentor to those initially named to the group last year.

Rogers said that is a great place to start building diversity.

“It is a group that has influence,” she said. “That structure, I think, is helpful.”

Not-for-profit leaders and fellows from the program are optimistic that the current social climate will help propel progress.

“I think it’s a tragic missed opportunity if we don’t intentionally, proactively and passionately pursue making leadership opportunities available,” Hutton said. “If we don’t, then I don’t think we’ve actually learned anything from this moment.”

Slash said more people are paying attention to actions being taken in the public and private sectors—not just at statements being made—so there should be more accountability going forward.

“I think everyone is leaning in at this moment,” she said. “That’s making a massive difference. … We’re on a journey and I think as a city we’ve got a long way to go, but we’ve also come pretty far.”

Winfrey-Harris said when the fellowship program begins again next year, she expects several changes, such as requiring a commitment from participating organizations to diversify their boards, providing more training for the fellows and offering them more networking opportunities so they can meet people from multiple not-for-profit boards, not just the one they are serving on.

“We think that it was positive; however, we think there are some things we possibly could have done a little better,” Winfrey-Harris said.•