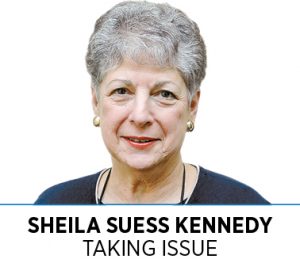 Charles Maurice de Talleyrand famously said that man was given speech to disguise his thoughts. In a much-quoted admission, the late campaign consultant Lee Atwater explained how Republicans applied that insight in order to win the votes of racists:

“You start out in 1954 by saying, ‘Nigger, nigger, nigger.’ By 1968 you can’t say ‘nigger’—that hurts you, backfires. So you say stuff like, uh, forced busing, states’ rights, and all that stuff, and you’re getting so abstract. Now, you’re talking about cutting taxes, and all these things you’re talking about are totally economic things and a byproduct of them is, blacks get hurt worse than whites. … ‘We want to cut this,’ is much more abstract than even the busing thing, uh, and a hell of a lot more abstract than ‘Nigger, nigger.’”

If policymakers were really discussing economic systems, rather than using labels to hide their actual motives, they would define their terms.

Socialism is what we call economies where the social safety net is much broader and the tax burden somewhat higher than in the United States. Scandinavian countries are an example. Interestingly, most of those countries maintain thriving private-sector capitalist markets. (Misuse of the term also obscures the considerable amount of socialism enjoyed by wealthy Americans. A system that privatizes profits and socializes losses is hardly free-market capitalism.)

Socialism isn’t communism. Communists believe that equality is defined by equal results. All property is owned communally, by everyone (hence the term “communism”). In practice, this meant that all property was owned by the government, ostensibly on behalf of the people.

In theory, communism erases all class distinctions, and wealth is redistributed so that everyone gets the same share. In practice, the government controls the means of production and most individual decisions are made by the state. Since the quality and quantity of work are divorced from reward, there is less incentive to innovate or produce. Countries that have tried to create a communist system have collapsed (the USSR) or moved toward a more mixed economy (China).

Socialism also isn’t fascism. Some of our dimmer policymakers like to say Nazi Germany was socialist because fascism was sometimes called national socialism. However, the two are very different. In fascist systems, the nation is elevated—a fervent nationalism is central to fascist philosophy. Although there is nominally private property, government controls business decisions. Fascist regimes tend to be focused upon a (glorious) past and to uphold traditional class structures and gender roles as necessary to maintain the social order.

The problem with using words to disguise our real motives isn’t just that it’s intellectually dishonest. It’s because such labeling allows us to avoid conversations we ought to be having—conversations about the basic questions of governing: What should government do and for whom? What should be provided communally, and what should be left to the private sector?

We “socialize” police and fire protection and numerous other services—parks, garbage collection, schools—because it is fairer, more efficient and/or cost-effective to do so.

Use of economic terminology to obscure our real motives has left the United States with the most dysfunctional—and expensive—health care in the developed world, thanks to Republican success in labeling national health care as socialism and socialism as un-American.

The GOP’s opposition to a mischaracterized “socialism” is explained perfectly by Atwater’s admission: Too many white Americans are unwilling to see their taxes used to benefit “those people.”•

Kennedy is a professor of law and public policy at the Paul H. O’Neill School of Public and Environmental Affairs at IUPUI.