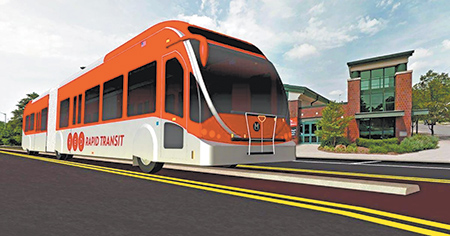 Federal inaction on a $75 million grant IndyGo is counting on to help fund a planned rapid-transit bus line is complicating a City-County Council decision about a transit tax increase.

IndyGo says it can still move forward with the Red Line and other system improvements without the Small Starts grant, which is hung up in congressional budget battles.

But without that money, IndyGo would be forced to take on more than double the debt to finance the project—which means the upgrades outlined in the Marion County Transit Plan would take up to three years longer to complete, even if the council approves the 0.25 percentage point tax hike.

And some improvements—new stations and road and sidewalk upgrades on some parts of three rapid-transit lines—would be scrapped altogether.

“At this time, I am not confident that the federal grant money is going to come through, at least not on the desired timeline presented by IndyGo,” Councilor Scott Kreider said in an e-mail to IBJ. “The failure of that money to materialize gives me great pause on the viability of this plan.”

Two key council votes are scheduled this month. On Feb. 21, the Rules and Public Policy Committee will decide whether to send the tax proposal to the full council. If the committee does so, the full council would vote on it Feb. 27.

But although 60 percent of Marion County voters last fall authorized the tax increase, council passage is no sure thing—especially with the federal grant in question.

Council President Maggie Lewis, who supports the tax, said the Rules Committee could vote to kill the proposal or table the discussion. The council also has the option of passing a tax increase at a lower rate than the amount proposed.

Councilors also could decide to postpone a vote until IndyGo learns whether it will receive the grant.

“There’s a million options,” said Lewis, who introduced the ordinance and said she supports a transit tax, despite the federal-funding ambiguity. “We know that there are improvements that need to take place in our transit system, with or without those grant dollars.”

IndyGo Public Affairs Director Bryan Luellen acknowledged the uncertainty at a City-County Council meeting on Jan. 30, when the agency presented an alternative funding plan to the council—one that assumes the city doesn’t receive the federal money.

But Luellen told IBJ earlier this month that the agency still is “pretty confident that the Red Line grant is going to materialize.”

If a full 0.25 percentage-point tax increase is enacted, raising the local income tax rate from 1.77 percent to 2.02 percent, a person who makes $50,000 would pay an additional $125 per year. The tax hike would go into effect in October, and the increase would be dedicated to IndyGo system improvements.

IndyGo expects the tax would generate $54.4 million a year, starting in 2018. Based on expected population growth and inflation, IndyGo predicts revenue would increase 2.2 percent each year.

IndyGo said the tax revenue is a critical part of the Marion County Transit Plan. Without it, the system won’t be able to buy more buses, hire more drivers and add the three bus rapid-transit lines.

“The 0.25 percent [tax] is needed perpetually to keep the system going,” Luellen told a council committee this month during a public hearing on the issue.

IndyGo officials say they could still make improvements without the $75 million Small Starts grant. But the agency would have to take on more than double the debt—$176 million in bonds, instead of $80 million—for key capital improvements. They said borrowing the extra $96 million, instead of only $75 million to replace the grant money, would be necessary to account for inflation over the extended construction timeline.

And that means more of the new tax revenue would be dedicated to paying off that debt, which reduces the cash available to upgrade the system.

The federal grant would cover much of the cost of constructing the first rapid-transit line, the Red Line—which would run from Broad Ripple south to the University of Indianapolis—freeing local tax revenue for other improvements.

But the grant is essentially caught in the congressional and presidential transitions.

The Federal Transit Administration recommended in February 2016 that the Red Line be awarded the grant. And before he left office, President Barack Obama drafted a 2017 budget that included the funding.

But Congress is the entity that approves the budget and appropriations, and that hasn’t yet happened. The federal government is operating under a continuing budget resolution that runs through April 28. That keeps the government running under previous funding levels but doesn’t include new spending.

“It’s very rare to fund a new project under a continuing budget resolution,” said Jessica Gail, a staffer in the office of U.S. Rep. Andre Carson, who is on the House Transportation and Infrastructure Committee.

Gail said Carson is trying to get the Red Line grant approved by Congress.

“I think he sees this as a priority and is really going to push for ways to make it happen,” she said.

Carson will recommend that the grant be included in a spring spending bill, Gail said. If that doesn’t pass, he’ll try to get it included in the 2018 budget for the fiscal year that begins Oct. 1.

“Our office just last week had a conversation with the president and vice president’s office urging them to include it in the new presidential budget,” Gail said.

Federal Transit Administration officials are also uncertain about the grant.

“We do not have an estimate for when Congress will pass the full-year appropriation, or when the Indianapolis project will receive Capital Investment Grant funding,” an FTA staffer said.

IndyGo’s alternative plan shows how many parts of its project would be delayed without the Small Starts grant.

For example, with the grant, Phase 1 of the Red Line would be finished in 2018, with the extensions north and south to the county lines finished in 2021. The entire route would get infrastructure improvements, including new stations that would be upgrades from existing bus stops.

But without Small Starts funding, the Red Line Phase 1 wouldn’t be finished until 2019, with the extensions finished in 2024. Rapid-transit electric buses would run along the entire route, but only Phase 1 would see infrastructure improvements.

“You just wouldn’t have a station to wait at, but there would still be a bus stop, maybe a shelter, depending on where it is,” IndyGo spokeswoman Lauren Day told IBJ.

Service frequency along the Red Line would remain the same with or without the grant. That means riders could catch a bus every 10 minutes from 7 a.m. to 10 p.m. on weekdays, with buses running every 15-20 minutes at other times, including weekends.

The biggest difference would likely be on the proposed Blue Line, an east-west, rapid-transit corridor that would run along Washington Street on what’s now Route 8. With Small Starts funding, the Blue Line would be completed in 2021. Infrastructure improvements, including stations, would be built along the entire line.

Without Small Starts, the Blue Line would be completed three years later. The western section, from Holt Road to the Indianapolis International Airport, would not receive new stations or other improvements.

Losing the grant would delay construction of the Purple Line, which would run from Lawrence to downtown, by one year—to 2021. Stations would be constructed along the route, but roads and sidewalks would not be upgraded. With or without the grant, buses would run every 10 minutes during peak weekday hours and every 15-20 minutes at other times.•