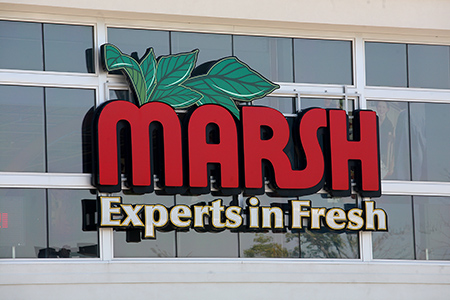 The Fishers-based company, which boasted 116 groceries and 154 convenience stores at the time, was hemorrhaging money, losing $13 million in the two previous quarters.

Once a homegrown powerhouse, Marsh was beginning to lose market share to national chains ramping up their grocery business. The bleeding would only get worse, with specialty grocers such as Whole Foods and The Fresh Market entering central Indiana, and Kroger investing millions to expand.

“The whole grocery war in our city exploded,” recalled Mark Perlstein, a retail broker at CBRE. “With all the competition coming in here, it made it very difficult for Sun Capital to survive when [Marsh] wasn’t the single focus of its business.”

Sun Capital, a Florida-based private-equity firm, bought Marsh for $88 million in cash and the assumption of $237 million in debt, with hopes of turning around the company’s fortunes and unloading it quickly for a tidy profit.

But in the decade since, Marsh has limped along, trailing much of the competition and steadily closing stores. In recent months, the pace of closings accelerated, as delinquent-payment lawsuits from landlords and vendors piled up.

Marsh’s struggles culminated on May 11, when the company filed to reorganize under the protection of bankruptcy, saying it will close its remaining 44 stores if it cannot find a buyer for all or parts of the chain. Bids will be taken until June 7, with an auction set for June 12.

The bankruptcy raises the question of whether Marsh was too far gone to salvage, or if the chain could have survived and even thrived with greater investment from its owner. Private equity owners like Sun put a premium on maximizing returns—a mindset critics say can put short-term profit ahead of what’s in the long-term best interests of a business.

David Livingston, a veteran grocery analyst who runs DJL Research in suburban Milwaukee, said Marsh was doomed to fail regardless of who bought the company.

“It really was too far gone, or another chain might have tried,” he said. “But none thought it was worth the effort. No one wants to buy a chain when it’s going to be No. 4 behind Kroger, Wal-Mart and Meijer.”

In 1968, Don Marsh, Ermal’s 30-year-old son, was appointed to lead the company and would retain the CEO’s title until 2006, when Sun closed on the purchase and dismissed him.

Under Don Marsh, the chain swelled beyond 100 groceries. But the company’s financial performance often was lackluster, and expenses were high. At one point, the Marsh family had nine family members on the payroll collecting a total of $3.1 million in annual compensation.

Don Marsh blamed the disappointing performance partly on having stores too close together in the company’s core Indianapolis market. He said the solution was to branch into new markets, including Chicago.

“We need new territory,” he declared at the company’s 2003 annual meeting. “We will not be cannibalizing ourselves here in Indianapolis.”

The Chicago expansion fizzled, however. The only store there opened in Naperville in 2005 and closed a year later.

“The family started making some weird decisions like going into Naperville, Illinois,” Livingston said. “That was dead on arrival; that made absolutely no sense at all.”

Reached by phone at his Carmel home, Don Marsh declined to be interviewed for this story. But eight years ago, after Sun sued him alleging he’d raided company coffers to pay millions of dollars in personal expenses, he cast himself as a scapegoat.

“It is clear the out-of-state, venture capitalist group is looking for someone to blame for their own poor business practices which have severely impacted the company I once proudly led,” he said in a written statement.

Don Marsh countersued, denying he misspent funds and alleging he was owed more than $1.6 million in back pay.

Among the more salacious allegations from the 2013 trial: Don Marsh’s personal pilot telling jurors he ferried him to New York City at least twice a month over the course of a year to visit one of his mistresses.

Sun said during the trial that, 18 months after the sale, it stopped paying Don Marsh his severance when it discovered millions of dollars of company-reimbursed travel expenses, some related to visits to mistresses.

A jury ultimately ordered Don Marsh to repay $2.2 million in improper expenses, but a federal judge later ruled that he could keep $2.2 million in severance, blunting the earlier verdict.

Meanwhile, Marsh’s store count and market share continued to shrink. Under Sun’s ownership, Marsh opened just one location, a 42,000-square-foot store on the west side of downtown. It was the chain’s first new store since 2004, when it opened at the Traders Point Shopping Center on the northwest side.

But now both are slated to close—the Traders Point outpost on May 27 and the downtown location soon thereafter—if a buyer for the 44 remaining stores doesn’t surface.

Marsh has announced a blitz of store closings in recent weeks, with 19 set for May alone.

“Unfortunately, they just got caught in the crosshairs,” he said. “I’ve been blown away with what Kroger is doing.”

In 2015, Cincinnati-based The Kroger Co. announced plans to beef up its operations in central Indiana, including creating or remodeling dozens of stores, establishing a regional training center, and creating an estimated 3,440 jobs. The chain expects to invest at least $464 million in the nine-county area.

Marsh acknowledges in its bankruptcy filing that it has failed to keep pace with the amounts competitors are spending to upgrade existing stores and build new ones.

Marsh’s top competitors, Kroger and Meijer, invested a total of more than $100 million the past two years in the local market while Marsh spent just $15 million on store remodels, Marsh said in a bankruptcy court filing.

“While these stores outperformed total chain results, they did not achieve the sales lift that the debtors were anticipating,” the company said. “Further, openings from several of the debtors’ competitors resulted in double-digit declining same-store sales. As a result, the debtors began facing liquidity challenges.”

Retail experts say Marsh might have been able to stave off Chapter 11 bankruptcy if Sun had invested more in its better-performing stores and closed unprofitable locations sooner.

“The decline of Marsh, or any other retailer, is usually a slow decline and not an overnight surprise,” said Richard Feinberg, professor of consumer science and retailing at Purdue University. “The fact is that executives need to sometimes take dramatic steps to save their company by controlling costs fast and not allow a slow bleed until it’s too late.”

Private equity firms, like any investor, aren’t prone to put in additional cash unless they’re confident they’ll earn a return on it. And now Sun, which early on raised tens of millions of dollars through sale-leasebacks of store locations and by selling surplus real estate, likely has little property left to sell.

When Marsh put itself on the block in late 2005, the company’s stock was in a tailspin. But a footnote appeared in the company’s fiscal third-quarter report that said an appraisal showed the company’s real estate was worth $100 million to $150 million more than listed on financial statements.

Two months later, Sun signed a letter of intent to buy the chain. The $11.13-per-share price was nearly double where the stock traded at its January 2006 low.

“One of the first moves is to sell back the properties and try to negotiate a cheap lease,” he said. “You want to cut the expenses as much as you can.”

Even though the grocery business is brutally competitive, experts say some smaller, regional players have flourished—evidence that chains of Marsh’s ilk aren’t automatically doomed to failure.

In October, Niemann opened its first Harvest Market, in Champaign, Illinois, billed as a farm-to-fork store.

“Independents are very nimble; they’re very agile and they know their consumer base very well,” said Laura Strange, spokeswoman for the Arlington, Virginia-based National Grocers Association. “It’s finding that niche and finding how to be relevant for that consumer niche, and investing in that.”

Feinberg agreed that many smaller chains are performing well. But he said keeping Marsh competitive “would have taken an additional investment that Sun clearly did not want to do.”