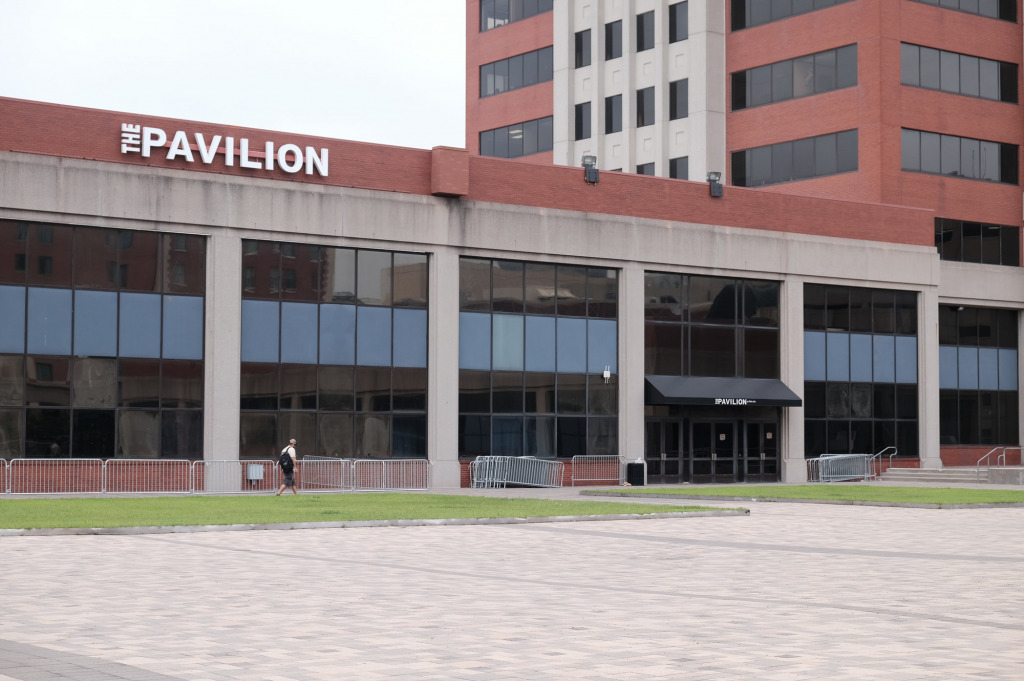 The Pavilion at Pan Am (IBJ photo/Eric Learned)

The operators of the Pavilion at Pan Am event center are considering building a new venue in downtown Indianapolis to replace the one local developer Kite Realty Group Trust plans to turn into rubble as part of its massive redevelopment of Pan Am Plaza.

Cebronica Luft, Jason Stellema and Jason Jenkins, who co-founded the Pavilion in 2015, said they could invest between $13 million and $18 million to build a larger facility, but they haven’t yet finalized a location.

The new venue would be up to 40,000 square feet—more than 40% larger than the existing one—and could accommodate up to 5,000 people for concerts.

It has long been known that the Pavillion business would have to either relocate or shut down altogether. Kite owns the  28,000-square-foot facility along Capitol Avenue and has had plans to redevelop the site since at least 2014. The building was originally known as Pan American Arena and housed twin ice hockey rinks. It opened in conjunction with the 1987 Pan American Games.

The Pavilion’s operators, who are on a 15-year lease, expect to be able to continue hosting events at the venue through mid-2022. That’s when they expect Kite to utilize a development clause in the lease to make way for the planned expansion of the Indiana Convention Center and two new convention hotels—a $550 million development that is now making its way through the city’s legislative process.

“Now that we know what the timeline is for the new development, it gives us a two-year runway to get everything off the ground,” said Luft, a 2018 IBJ Forty-Under-40 recipient. “We’ve proved over the last five years is there is a huge use … for the type of venue that we have. So we want to continue with that concept.”

She said the ownership group is working with city officials on the new project, including the evaluation of several sites within a quarter- to half-mile radius of the existing venue—a sweet spot to keep the venue walkable for visitors to downtown hotels, restaurants and the Indiana Convention Center.

The owners declined to identify specific locations when asked by IBJ, but said developing such a venue will take about two years once land is secured.

“We definitely have to be downtown—as close to the Wholesale District and the convention center as possible,” Stellema said. “The location’s ultimately the most important thing for us in looking to the future, to be able to capitalize on events that are held there.”

Stellema said the target investment, which could involve additional investors, would be around $15 million.

The new venue would likely rely on surrounding parking structures and lots, since “it would add a lot of cost to the project” to incorporate parking into the new Pavilion development. The existing facility relies heavily on a 1,200-space underground parking lot.

Like the current facility, which relies on an open design to allow for various uses, the new Pavilion would have a layout that could accommodate events ranging from weddings receptions and corporate events to trade shows and music performances.

“Ideally, we’d be able to find land here in the next six months and break ground” soon after that, Stellema said. “The best-case scenario would be two years from today, but we haven’t found the right spot yet. So it could work out well that we’re wrapping up [activity at] our current venue and moving into something else.”

The Pavilion’s ownership team has invested millions of dollars to improve the property over the past five years, including more than $1 million in audio-visual equipment and other improvements before it opened. Last year, the venue hosted more than 80 events and had revenue exceeding $5 million. Its maximum capacity for concerts is around 3,000 people.

The existing facility is already the largest independently operated concert venue in Indianapolis, but the proposed new Pavilion would be nearly double the size of Old National Centre (2,600 seats) and about two-thirds the size of the Indiana Farm Bureau Insurance Lawn at White River State Park (7,500), now being renovated to add permanent seating.

Those venues—and most other large music stages in central Indiana—are owned or exclusively promoted by Live Nation.

Stellema said the new venue will likely incorporate new design standards from a post-coronavirus world, including a larger lobby and intake area, and technology to screen guests. While the ownership team has started on some preliminary design work, it has not yet signed an architect for the project.

The group hopes to get started on the new venue “as quickly as possible”—even if there is some overlap in operation with the existing Pavilion site or if the Pan Am Plaza redevelopment is further delayed, said Stellema.

Plans for the new Pavilion are coming together even as the existing venue copes with fallout from the coronavirus pandemic. The venue had been on pace for its “best year ever,” with more than 100 events on the calendar before the pandemic, said Stellema.

Instead, it has been closed since mid-March and lost out on more than $3 million in anticipated revenue. The ownership team is looking for ways to begin utilizing the outdoor plaza area by hosting food festivals, small concerts and corporate events.

Luft said it will likely be several months before most national artists begin touring again. The Pavilion can survive comfortably in current conditions for another six months, utilizing cash reserves, she said.

For now, though, the focus for the ownership group is split between finalizing a reopening plan and finding the Pavilion’s next home in downtown Indianapolis.

“We really want to build upon what we’ve built at Pan Am,” said Stellema. “We think with a new venue, we should—once everybody’s out and about and safe again—be able to pick right back up to that 100-plus event area and build from there.”