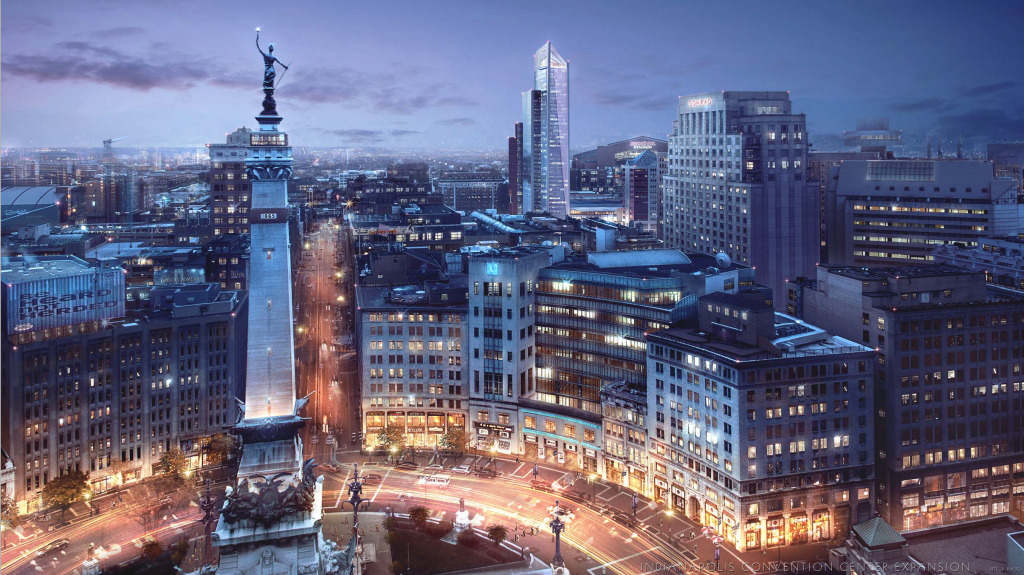 The view of the Signia hotel from Monument Circle. (Rendering courtesy of Ratio and Kite Realty Group Trust)

In addition to making a big change to the Indianapolis skyline, the 800-room Signia Hilton hotel planned for Pan Am Plaza is expected to alter the competitive landscape for downtown’s convention hotels.

The $300 million hotel will be the most expensive and elaborate new lodging project built in the city since the $450 million JW Marriott complex was completed in 2011.

And while every other hotel near the Indiana Convention Center will be competing with the 40-story Signia for guests, the new property’s primary competition will be the JW, since both will be directly connected to the convention center and offer upscale services.

It also will face competition from the Westin, the Hyatt Regency, the Omni Severin, the downtown Marriott and Crowne Plaza at Union Station, as well as several others.

The hotel is part of a massive, half-a-billion-dollar development project by Indianapolis firm Kite Realty Group Trust that also includes a publicly-funded addition to the convention center. Several municipal bodies, including the City-County Council, will begin considering financing proposals for the development in August.

The new Signia brand was designed by Hilton Worldwide to fit between the Conrad—one of the company’s most upscale brands—and its namesake Hilton flag (both of which already have a presence in Indianapolis), with a specific focus on meetings and large events. The brand also is being launched in Atlanta and Orlando.

The Indianapolis Signia, white, glass-curtain-clad tower designed by local firm Ratio Architects, is set to be built on the southwest corner of Georgia and Illinois Streets, one block east of the main Indiana Convention Center building.

The hotel is expected to share about 143,500 square feet of meeting space and direct connectivity with the convention center and feature a signature restaurant, massive bar and a variety of common spaces for small and large groups.

It will also have an observation balcony near the top of its eastern facade and a rooftop seating and lounge area on the third floor, along with an outdoor pool.

“We know based on research that Indianapolis is the most convention-dependent city in the nation,” said Chris Gahl, vice president of Visit Indy. “So, with Signia being a new brand developed by meeting planners for meeting planners, Hilton keyed in on our market with something that’s [focused on] gobbling up more market share of the national convention business.”

Gahl said the decision to bring the Signia to Indianapolis “breeds confidence among meeting planners” about the city’s future as a host city. He and others in the convention business have repeatedly argued downtown’s future—both as an event hub and overall—hinges on the success of the Pan Am Plaza project.

Convention business has been strong in Indianapolis for the past several years, with downtown hotel occupancy around 70% in 2019—about 4% higher than the national average.

Hilton began talks with Kite to bring the Signia and another to-be-named property to Indianapolis in late 2017, after the Capital Improvement Board of Marion County—which manages the convention center—requested proposals for a sixth expansion to the meeting facility.

At the time, the Signia brand had not yet been fully established, although Hilton had plans to introduce a convention-focused product in certain markets. The proposal was selected in October 2018.

Tom McGowan, Kite’s president and chief operating officer, said it was “a joint decision” between the firm and Hilton to collaborate on the RFP for the Pan Am Plaza site. He declined to say which party first approached the other about the idea, but developers typically initiate such deals.

“[Hilton] wanted to build a stronger presence inside the Indianapolis market and Kite, obviously, wanted to have one of the best hotel operators in the world as part of our team,” he said. “Things obviously [progressed further] when they established their new brand, Signia Hilton, to be part of this overall structure.”

McGowan and some of Kite’s executive team already had an existing relationship with Hilton as developers of the 243-room Conrad, which opened in 2006, which he said strengthened the proposal. The luxury Conrad is owned by Circle Block Partners LLC, which is made up of Kite leaders and the city of Indianapolis. Kite also worked with Hilton on the development of an Embassy Suites in South Bend that opened in 2018.

Gary Steffen, who oversees the Signia brand for Hilton, told IBJ in an email that the cities selected for the new flag are have growing convention and meetings business, presenting the company an opportunity to extend their reach—and in turn, revenue—in the category. The new brand was announced in February 2019.

“[Signia] is Hilton’s premier meetings and events brand, which will offer both meeting professionals and sophisticated business travelers a carefully curated portfolio of hotels in the top urban and resort locales,” Steffen said. “For Indianapolis, Pan Am Plaza offers not only the footprint for a significant convention hotel in the heart of downtown, but is also next to the convention center.”

The proposed Signia in Atlanta, which will have about 975 rooms, will be connected to the Georgia World Congress Center convention facility, while the 1,000-room property in Orlando will be adjacent to Walt Disney World and 20 minutes from the Orange County Convention Center. Indianapolis is the smallest of the three markets getting the Signia flag first.

Despite uncertainty about the pandemic, Hilton remains bullish on the convention and meeting market, Steffen said.

“We are all in a unique and challenging time right now, but we’re optimistic about the future,” he said. “We have more than 100 million Hilton Honors members who are eager to travel and do business in-person again in these popular meetings markets—when it’s the right time to do so.”

Construction on both the Signia and the convention center addition are expected to begin by late 2022, with construction completed by late 2024 or early 2025.