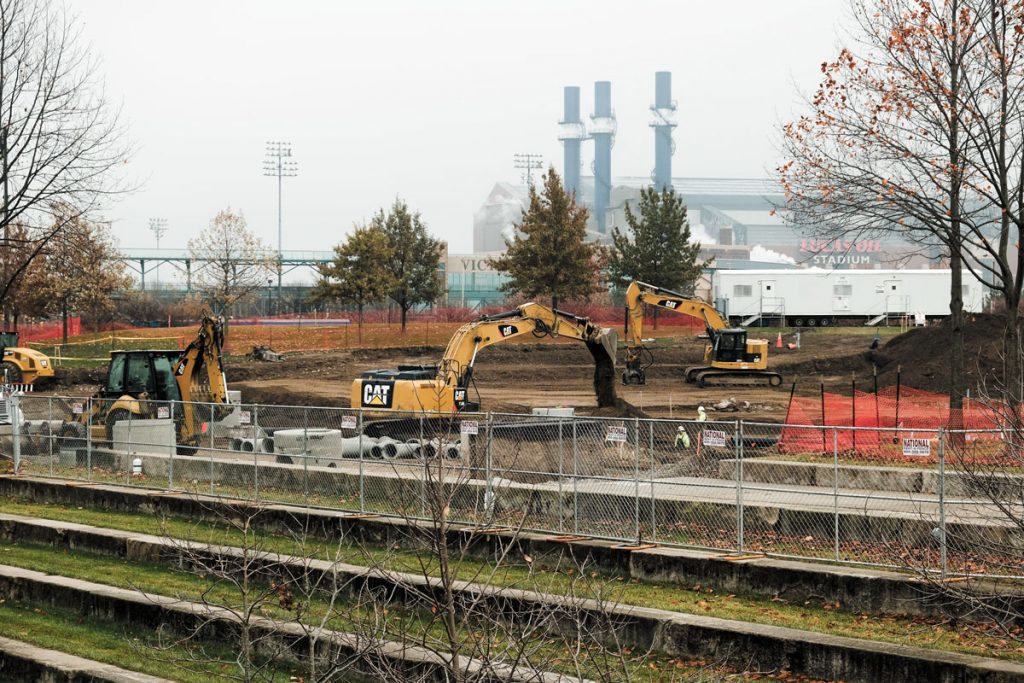 The project’s $15.8 million second phase, set to open in June, will include the permanent stage. (IBJ photo/Eric Learned)

In late 2017, White River State Park Development Commission Executive Director Carolene Mays-Medley proposed building a permanent concert venue adjacent to the river that would replace the temporary stage that is built and torn down every year.

Her suggestion came years after city leaders and previous White River State Park officials first discussed locating a permanent music venue along the river. But earlier proposals, including one for a $30 million, 10,000-seat venue at the former GM stamping plant, never came to fruition.

“Everybody told me, ‘There’s no way you’re going to be able to get this done,’” Mays-Medley said.

That was all the motivation she needed.

She wrote the request for qualifications that was shared with developers and put together a design committee. She wanted to move quickly and was again told she probably wouldn’t be successful.

But Mays-Medley secured a funding partnership with Live Nation Entertainment, the company that manages concerts at the temporary venue known as the Farm Bureau Insurance Lawn, and she got the green light from Gov. Eric Holcomb’s office and state lawmakers.

The $31.6 million project broke ground in 2018, and the first phase, which cost $2.4 million and included 60 permanent restrooms, is already complete.

The $15.75 million second phase is under construction now and will accomplish Mays-Medley’s goal of bringing a permanent concert venue to the 250-acre downtown park when it’s finished in June. In addition to the stage, the park is also adding a concrete pad for 3,000 permanent seats, artist amenities and 40 more restrooms.

The proposed $13.4 million third phase, which is dependent upon fundraising, would add an artistic canopy over the permanent seating area and part of the stage.

It’s possible some of that additional funding will come from the state, which already provided $12 million to the White River State Park Commission from the 2017-2019 budget for the project.

“We’ll get done with phase one and phase two and then we’ll start talking about how we realize the next level or the next phase,” Gov. Eric Holcomb said after the groundbreaking ceremony for the second phase in October.

The new stage will be in the same location as the old—south of the NCAA Hall of Champions and east of the White River—and will continue to host concerts as the park has every summer since 2004.

And total seating capacity—7,500—won’t change from the old venue. But the experience will.

The permanent stage will offer better visual and production capabilities with two new LED video screens on each side. And the permanent seats will provide a more comfortable option for visitors who prefer not to sit in the grass.

“It’s probably like a 3-to-1 ratio in the amount of production we can put on the stage,” Live Nation Senior Vice President Tom Mendenhall said.

That alone could attract more performers to the venue, because some artists refuse to play on temporary stages with limited production options.

“In theory, the shows will be better and more artists will want to come and play,” Mays-Medley said.

“The hope, I think, is to bring additional shows that maybe skip the market because of our limitations,” Mendenhall said.

He said he hopes the amphitheater will host 25-30 concerts every season, which would be the most the venue has ever offered.

Another new attraction for artists will be the 4,000-square-foot amenities building adjacent to the stage that will have dressing rooms, showers and production offices. Currently, artists have to use trailers next to the stage.

“With the guest and with the artist, we want them to have a good experience,” Mays-Medley said. 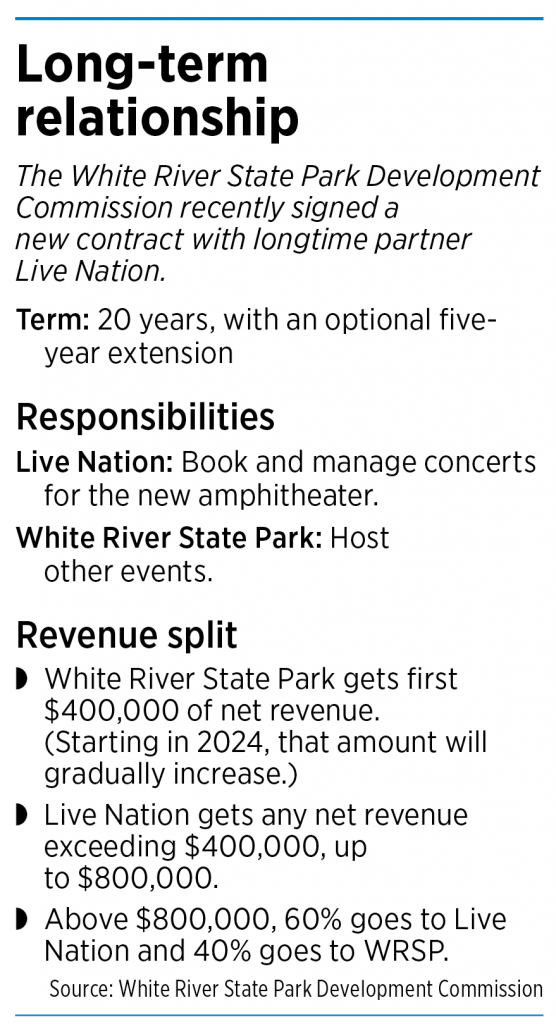 The project also addresses a big amenity for guests—permanent restrooms. Before the first set of restrooms was completed last June, concert goers had to use portable toilets.

“It was our number one complaint—not to have restrooms,” Mays-Medley said.

A big plus for the White River State Park and Live Nation will be not having to construct and tear down a temporary facility every year. That cost about $600,000 annually, according to Mays-Medley.

Chris Gahl, senior vice president of marketing and communications with Visit Indy, said his group already markets the park and the concert venue to leisure tourists and convention visitors, but the changes will make it even more attractive.

“We’re able to expand our marketing because, inevitably, more concerts and larger performers will take to the stage,” Gahl said. “It’s very appealing.”

Not just for music

Mays-Medley said she hopes the permanent stage can be used for much more than just concerts.

She envisions it as a place for public announcements, ballet performances, orchestras and theaters, and events hosted by schools, universities and not-for-profits.

“We’ll be able to offer the venue as a community asset,” she said. “It’s a beautiful area on the river.”

Gahl agreed. He said he sees the potential for Visit Indy to suggest the venue to convention organizers for events like keynote speakers, private concerts, panel discussions or movie screenings.

“It’s a unique venue outside,” he said. “It gets you outside the conference room.”

Mays-Medley said White River State Park will be responsible for organizing and managing the community events. Live Nation will continue to book concerts.

In the midst of this project, the White River State Park Development Commission inked a new, long-term deal to keep Live Nation as a partner.

In the 20-year agreement, Live Nation agreed to contribute up to $10 million for the venue upgrades; continue to manage the live music events; and continue to secure sponsorships for the stage, concert series and other venue events. The White River State Park Development Commission can also seek sponsorships.

One significant sponsorship Live Nation is pursuing is for the stage itself. A deal with Farm Bureau Insurance expired at the end of the last season.

Mays-Medley said Live Nation has been an important partner for the park, and she’s glad they were able to finalize a new agreement.

Gahl said it’s “critical” that the park and Live Nation have a long-term partnership. Otherwise, he said, it would be like building new office space without staff to lease it.

“White River State Park excels at keeping the 250-acre greenspace clean and safe and walkable,” Gahl said. “Live Nation comes to the table with the expertise in attracting big-name artists.”•