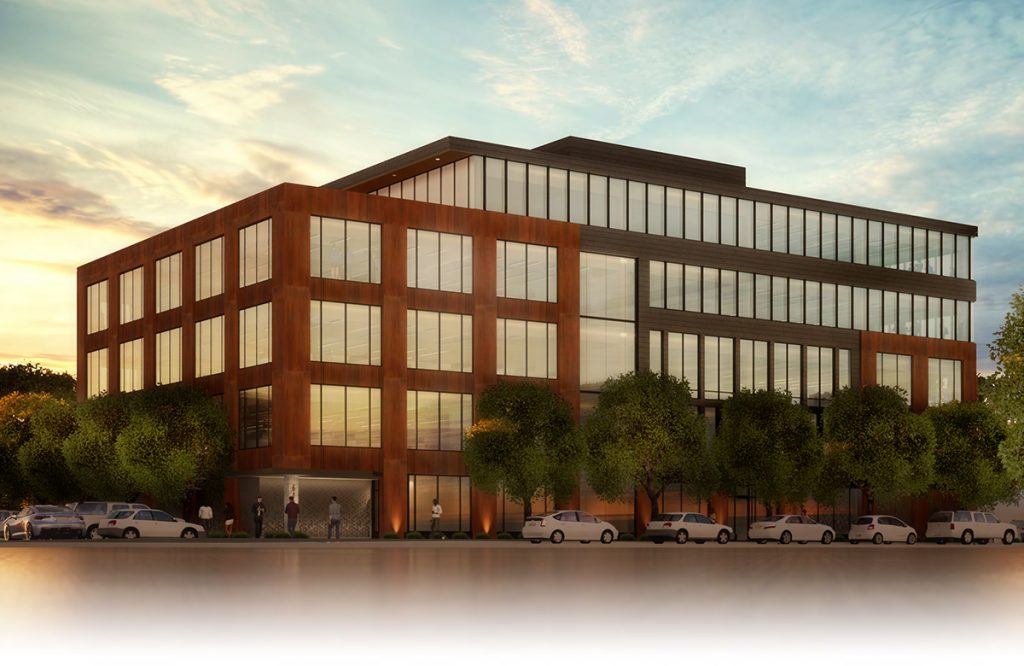 An early rendering of the Madera project in Broad Ripple. (Image courtesy of Gershman Partners)

The developer of an unusual, $17 million office building planned in Broad Ripple is requesting a tax abatement for the project that could save it more than $1 million.

The Madera, a three-story structure with a fourth-floor balcony level planned for the east side of the 6400 block of Ferguson Street, is being developed by Indianapolis-based Gershman Partners. The Class A office project has been designed with an all-timber frame and concrete floors.

The city’s Metropolitan Development Commission will consider the request for the 10-year abatement at its April 6 meeting. It would save Gershman roughly $1.35 million on real property taxes.

The request also must be approved by the City-County Council and the Metropolitan and Economic Development Committee before eventually returning to the MDC for final approval, likely in May.

Gershman announced the 56,000-square-foot project in early March 2020, but it has been delayed for two years due to the pandemic and escalated construction costs.

The building’s design will feature mass timber and cross-laminated wood, with concrete floors on every level. Such a design is rare for larger commercial buildings. The exterior would be wrapped with glass, steel, zinc and other materials.

Initial plans called for a $20 million, five-story structure and a ground floor composed of a 34-space parking garage, bicycle storage and a lobby. The latest plan retains the same square footage, but apparently in a shorter building, according to city filings.

Representatives of Gershman did not return IBJ messages seeking clarification and a timeline for the project.

The project also is expected to improve both Ferguson and 65th Streets by adding public sidewalks, removing encroachments and creating 12 on-street parking spaces.

If granted the abatement, Gershman is still expected to pay a base tax of at least $24,169 annually, with an additional $562,245 in taxes for new construction over the life of the abatement. After the 10-year period, the firm would pay about $206,381 annually in property taxes on the improvements.

Gershman plans to pursue one or more tenants for the property who by 2025 would create a total of at least 50 jobs with an average wage of $20 per hour.

The firm has also committed to donating 5% of its abatement savings—$67,500—to the Broad Ripple Village Association to support infrastructure projects and grant programs in the neighborhood.

StructureCraft, a Canada-based firm, has been hired as a contractor and will provide wood harvested and grown in that country.

The project would occupy four parcels between 6407 and 6419 Ferguson St., which are occupied by four residential-style buildings that have housed short-term rentals and small businesses.

Gershman told IBJ in 2020 that the four parcels were under contract, and the buildings would be demolished to make way for the project.

The development will sit immediately west of an unrelated Gershman project at the former Books & Brews  building at 6420 Cornell Ave., which faces the Monon Trail. Gershman acquired the property in early 2020 for $750,000.

Correction: An earlier version of this story incorrectly said that the Metropolitan Development Commission had approved a tax abatement for the Madera project. The story has been changed to reflect that the MDC will first consider the request for the abatement on April 6.  You can see all of our corrections here.