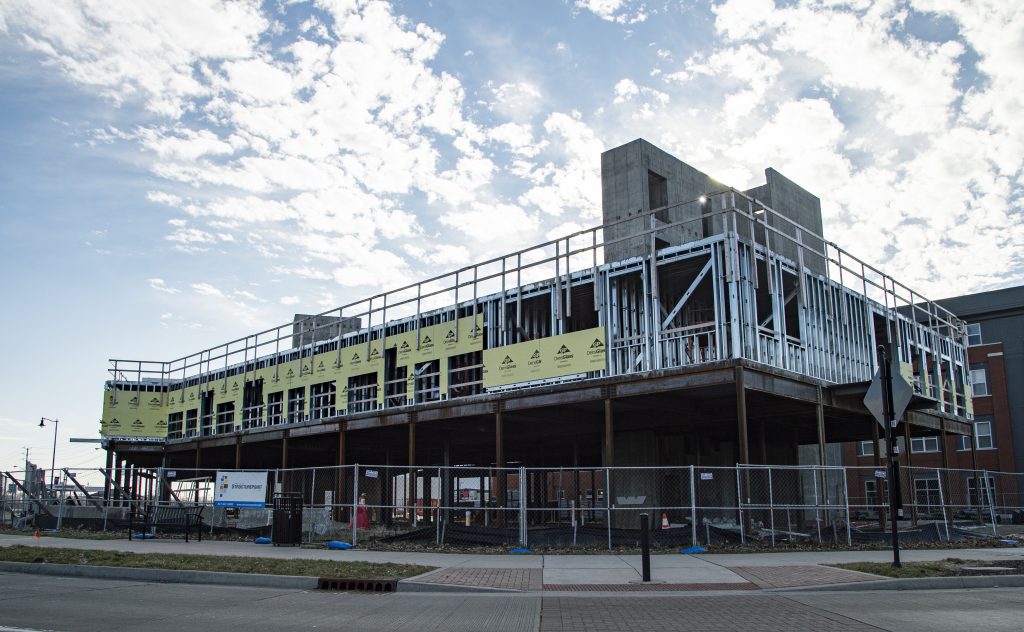 The town of Speedway is considering potential legal remedies to the situation involving the partially built Wilshaw hotel across from the Indianapolis Motor Speedway after the agreement for the project lapsed last month.

The economic development agreement between the town and Indianapolis-based developer Loftus Robinson LLC lapsed Jan. 27—when the hotel was expected to open before encountering major delays more than a year ago.

The hotel is the second phase of a $36 million project that also features a 90-unit apartment structure built by Scannell Properties along Main Street, completed in 2019. The Wilshaw is expected to carry the Hilton Tapestry flag.

The town has hired law firm Drewry Simmons Vornehm LLP to “assist us in reaching a resolution,” said Tim Gropp, the town’s economic development director, in a written statement.

“We have now passed that date, with no substantive response from Loftus Robinson despite multiple attempts,” he said. “We gave Loftus Robinson every opportunity to demonstrate their ability to build the hotel, including a catch-up plan. We have now entered a new phase. … We are aggressively exploring our options to move the project forward.”

Loftus Robinson has struggled to resume work on the 126-room hotel since construction stalled in mid-2019, after the firm ran out of funds. Last October, the company signed a deal with local developer MHG Hotels LLC to get the project at the southeast corner of 16th and Main streets back on track.

Gropp said town officials have grown “frustrated by a lack of transparency and communication from Loftus Robinson despite our multiple requests,” as well as the firm’s effort to continue batting away responsibility for the project.

That includes the firm’s attributing delays to the coronavirus pandemic—something Gropp flatly rejected at the time.

“It’s the same issue they’ve had for a year, so they’re clearly not able to resolve it from our standpoint,” he said in May. “We’re now at a spot where we’re working directly with all the partners to try and find a solution.”

A lawsuit could be among the options on the table, along with an attempt to retake the property, or an effort to buy the construction loan for the project—the latter two options are listed in the economic development agreement as potential remedies for a major construction delay.

The town has had harsh words for Loftus Robinson in the past, even threatening the possibility of legal action if the company didn’t resume work on the project. But throughout the past year, town officials have said the firm has come to the table enough to stave off those threats’ actually being followed through on.

Gropp said he was hopeful that, when MHG was brought into the project, the development would pick up steam. But a search of Marion County Recorder’s Office documents indicate no new loans have been taken out for the project—a key component to adequately fund the development.

“We have full confidence in MHG, which is why we were supportive of the proposed partnership between MHG and Loftus Robinson as announced last fall,” Gropp said, pointing to the firm’s development of the Courtyard by Marriott in the town, and ongoing work for a new Hampton Inn and Suites at the Founders Square development on the western edge of the town.

Reached by phone Tuesday night, Loftus Robinson owner Drew Loftus said he was unaware the town had retained legal counsel or was planning to seek alternative solutions for the project.

“I have no knowledge of that,” he said. “We’re continuing on the path we have shared.”

That path is expected to include work resuming sometime this spring, although Loftus did not provide a specific date.

“The project’s moving forward as it has been and I think [IBJ has] done enough stories about hotels and COVID that everyone understands the situation,” he said. “We’re still shooting for the spring.”