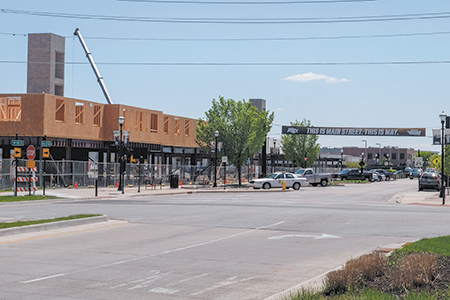 Visitors to the Indianapolis Motor Speedway will notice that construction is under way on the $36 million Wilshaw apartment and hotel project—the capstone to the town of Speedway’s decade-long effort to remake its Main Street.

Town officials in 2008 began an aggressive play to turn the world-famous oval into an economic engine that runs year-round by creating a retail and entertainment district along Main Street.

Despite the presence of the racing behemoth a block away, the strip stretching from West 16th Street on the north end to 10th Street on the south end had seen limited economic development activity.

For years Charlie Brown’s Pancake and Steak House, open since 1975, served as Main Street’s lone dining destination. Not so anymore.

Overall, Speedway has benefited from $375 million in development the past 10 years through a combination of private and public funds for projects that stretch as far west as Interstate 465.

The crown jewel, however, is the Wilshaw. “It changes the complexion of the town,” Speedway Town Manager Jacob Blasdel said. “You’re going to have people living all year round right on Main Street.”

Locally based Loftus Robinson and Scannell Properties are developing The Wilshaw, named for Wilbur Shaw, the last native Hoosier to win the Indianapolis 500. Born in Shelbyville in 1902, Shaw took the checkered flag in 1937, 1939 and 1940. He was killed in an airplane crash near Decatur on Oct. 30, 1954, one day before his 52nd birthday.

The development will feature 90 apartments and 8,000 square feet of retail space, in addition to a 126-room Tapestry hotel from Hilton and 250-space parking garage. The one- and two-bedroom apartments, ranging from 667 square feet to 1,125 square feet, should be finished next April, with the hotel following.

The project is going up on 3.4 acres the developers bought from the town at the southeast corner of the roundabout near the front door of IMS. The roundabout opened in November 2014 and links Crawfordsville Road and East 16th Street to Main Street, while closing Georgetown Road to through traffic.

It marks the first residential project in downtown Speedway, said David Ravensberg, a director at Scannell.

“Establishing a residential core in downtown Speedway will challenge the misconception that excitement only happens in May,” he said.

Construction on the apartments began in November, with the frame and walls of the five-story building rising from the ground. Work on the hotel will start within a few months, said Drew Loftus, a principal at Loftus Robinson.

“It’s really well suited for Speedway,” he said of Tapestry, a brand Hilton Hotels & Resorts launched in 2017 that uses different designs for each location. “Each of the hotels [is] unique and they take on the likeness of the location and the surroundings.”

The other is a conversion of the 12-story One Jackson Square building downtown at 233 McCrea St. between South Illinois and Meridian streets. It is set to be developed by Indianapolis-based Sun Development & Management Corp.

Marketing materials for The Wilshaw say the Speedway market can command $400-plus rates during the racing season, in a metropolitan area with an average daily room rate of $150.

“We felt that with the new development on Main Street, the Wilshaw and the Tapestry would be a nice anchor,” said Chris Brock, Hilton’s senior director of development.

A hotel near the Speedway surely would fill a void. The track has been without a lodge since the 96-room Indianapolis Motor Speedway Motel closed in December 2008.

Blasdel, Speedway’s town manager, expects the new hotel not only will benefit from race activities but also from conventions by capturing visitor overflow from downtown hotels unable to accommodate all visitors.

IBJ.COM EXTRA
See a map of the booming development in Speedway.

The Wilshaw is the latest in a string of projects undertaken to pump more life into the town.

Following months of planning, Speedway officials broke ground in late 2009 on the first phase, which involved $6.7 million in road improvements to Main Street, laying the foundation for redevelopment.

The ambitious revamping includes more than 350 acres from Main Street to Holt Road and from 16th to 10th streets, just south of IMS.

All that remains undeveloped on Main Street are two town-owned parcels in the 1300 block, next to the Ted’s Beauty Shop building. They are currently used for parking.

But Bell Racing USA has its eyes on the site. The firm—which in January opened an office and retail store in temporary space on Main Street—hopes to build a permanent home on the parcels.

And behind the Dallara IndyCar factory on the east side of Main Street sits 2.3 acres that the town is in discussions to sell for a potential industrial use.

By bringing its office to Main Street, Bell followed in the footsteps of Wilcox Environmental Engineering Inc., which moved from the northwest side of Indianapolis in April 2017. The firm is the largest tenant in a two-story, 16,000-square-foot project involving a $2.5 million renovation of the Rosner Drugstore building across from where The Wilshaw is under construction. O’Reilly’s Irish Pub and Tacos and Tequila are in street-level space below Wilcox.

Directly to the north, between West 16th Street and Crawfordsville Road, the United States Auto Club is investing $2.1 million in its facility. The project involves a new façade and converting some of the building into co-working space for the racing industry.

“It’s having a domino effect,” Blasdel said of the Main Street activity.

With much of the Main Street work completed, Speedway officials are turning their attention to the west end of town, where some development already has occurred.

Indianapolis native and Minnesota Timberwolves point guard Jeff Teague and his family in August opened The Factory, a 33,500-square-foot fitness and training facility on the south side of Crawfordsville Road near I-465.

The Teagues are franchisees of D1 Training, a Nashville, Tennessee-based company that provides frameworks for fitness programs for people of all ages. The Factory houses the D1 Training center.

To the east, on the site of a former Dollar Inn, a $12 million, 98-room Courtyard by Marriott is under construction and should be completed by the end of the year.

And on the north side of Crawfordsville Road, where a Super 8 motel sat, the town owns 23 acres that became available after I-74 was reconfigured.

The town accepted requests for proposals for the property—one of which called for a medical and health care project.

But Blasdel said Speedway decided to “take a step back” from that development, recognizing the importance of the location in terms of establishing a western gateway to the town. Town officials are evaluating the site to determine the best fit, which could be another hotel, Blasdel said.

“We don’t want to rush that development,” he said. “We want to make sure we get it right.”•