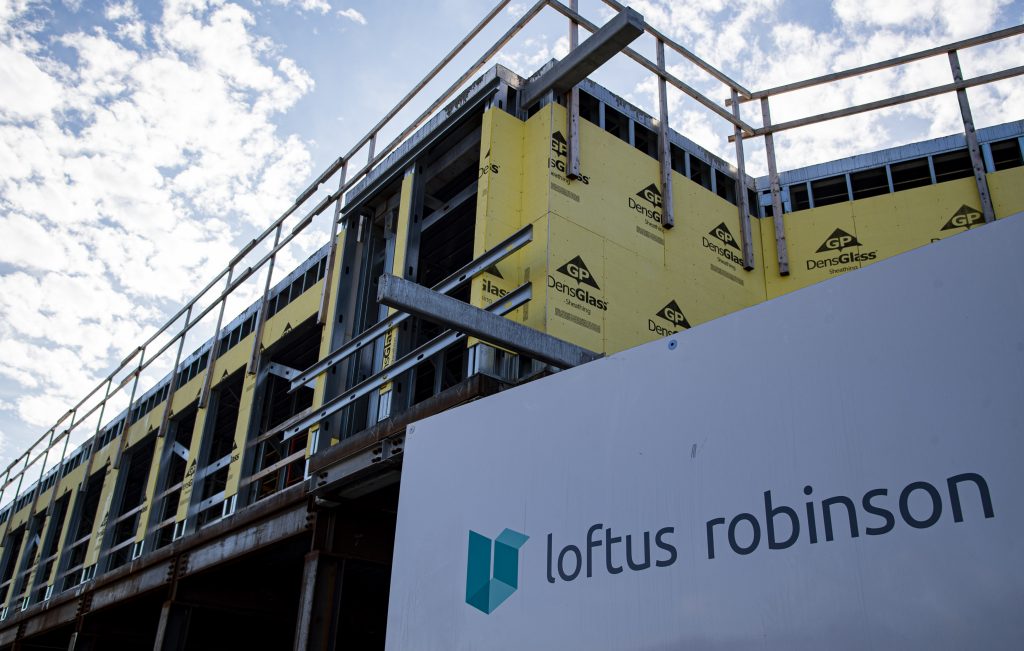 Town of Speedway officials are weighing their options for how to respond to a six-month construction delay on a prominent hotel project near Indianapolis Motor Speedway amid a looming mid-January deadline to restart work.

Progress on the 126-room Wilshaw, at the southeast corner of Main and 16th streets, has been stalled since early July while Indianapolis-based developer Loftus Robinson awaits the release of its first loan installment to finance the project.

The stoppage is a concern for Speedway officials, who are now considering whether the town should try to complete the project on its own. Original plans to open the hotel in 2021 have been put in doubt by the delays.

The town said it sent a letter to the developer Thursday to let it know that the extended stoppage puts the project out of compliance with an economic development agreement signed by the parties in 2016. The project agreement does not allow construction work to stop for more than 180 days.

“The town was hoping … this project could be shelled up and move forward on the original timeline, but that hasn’t happened,” said Tim Gropp, economic development director for the town. “We have several contingencies in [our agreement] that are provided to us and we will keep all those on the table ready to move forward.”

The project is supported by developer-backed bonds that will be repaid through tax-increment financing measures, a tool often used by municipalities as a development incentive. The first phase of the overall $36 million development, an apartment structure built by Scannell Properties along Main Street, was completed last year.

A clause in the Wilshaw project agreement allows the town to begin the process of taking possession of the one-acre property—which it sold to Wilshaw LLC for about $750,000 in 2017—if a delay of at least 180 days occurs after construction begins.

While day-to-day construction has been stopped since July, contractors and subcontractors continued mechanical and other infrastructure planning for the project through September. Meanwhile, the developer says it has been working with Hilton to iron out requirements for the Tapestry flag the hotel will bear.

Based on a milestone schedule in the project agreement, this is the second time the development has been substantially delayed. Construction was supposed to begin in mid-June 2018 but did not start until March—a delay of nearly 270 days. Infrastructure work took place during that time while Loftus Robinson sought financing.

Drew Loftus, principal of Loftus Robinson, said in an email to IBJ the project has been delayed since July because the company is required by its lender, Lake City Bank, to meet “an additional financial obligation that’s structured as a funding requirement” before it can receive the first part of the $21.1 million loan it secured in December 2018.

A real estate source told IBJ that Loftus Robinson began construction before its first loan installment was received by tapping multiple investors for funds. Work stopped after those investors opted not to continue putting money into the project after the bank sought more equity before releasing the project loan, the source said.

Loftus said he anticipates work on the project resuming “at any time,” with completion of the project expected about one year from the restart date.

“We have been working with the town and certainly appreciate that they—like us—want to see the project move forward as quickly as possible,” he said. “As is typical with development agreements, our contract contemplates a range of potential delays.”

Even if the project’s hiatus hits the 180-day mark, the town would take over the project (and site) only as a last resort, Gropp said, since construction has already begun on the hotel structure.

Loftus Robinson has until Jan. 17 to submit a catch-up plan, but if it chooses not to provide one—or has one approved but does not take appropriate steps to move that plan forward—the town would have three options at its disposal:

— It could develop a catch-up plan on its own and legally require the developer to implement it;

— the town could take possession of the property and complete the project on behalf of the developer;

— or the town could purchase the construction loan for the project, if approved by the lender, and determine how best to move forward with the development.

If the town were to pursue the project on its own, the developer would be required to cover any cost overages to the construction loan, according to the development agreement.

Gropp said he believes the developer has “every intention” of moving forward with the project, and that the firm and the town remain in communication.

“Obviously, the best and cleanest scenario … is that Loftus Robinson works through their issues as soon as possible and gets back on site as soon as possible,” he said. “There is a timeline in place that needs to be met and some of those dates are coming up sooner than we’d like them to.”

But the town is keeping “all our options available to us,” Gropp said.

As it moves forward, Loftus Robinson faces another issue: The project is the subject of four mechanic’s liens totaling $6 million for bills accumulated over the first few months of construction. Liens are claims of legal rights to sell a piece of property to pay for a debt owed by its owner, and are standard practice in situations where contractors aren’t paid for work on projects.

Companies that have filed liens on the property:

— F.A. Wilhelm Construction Co., general contractor, $4.5 million, filed Oct. 16 with no date given for final day of work at the site;

Loftus said his firm is aware of the liens but said those filings aren’t indicative of the company’s relationship with its contractors, adding the F.A. Wilhelm will still be the project’s general contractor when the project resumes.

None of the four companies that filed liens on the property returned calls requesting comment.

“This is certainly not out of the ordinary in our industry, especially for a project of this complexity that runs into unplanned delays,” he said. “We maintain a good working relationship with our contractor and will resolve this as we continue construction.”

But Loftus Robinson has so far failed to secure a partner that would satisfy its lender’s equity requirements, according to IBJ’s source.

Loftus denied the claim that the firm is seeking any type of partner for the project.

The source said local developers that have been approached expressed concerns about the project being in an area that—aside from a few weeks every year—is not a hotbed for tourism or business activity.

Town officials have touted the development as a boon for the area, bringing more people and business to Speedway. The project is part of a larger redevelopment of the city’s Main Street corridor, immediately south of the development.

Several businesses, including a handful of racing companies, have relocated from other parts of Indianapolis to downtown Speedway buildings to be closer to the racetrack. Existing businesses, like Allison Transmission, also have been ramping up their production as they look to expand their own operations.

But the real estate source told IBJ they are skeptical about the long-term success rate for the project, including whether it will even be completed amid rising construction costs and concern from potential investors over the track record of Loftus Robinson.

The firm has only completed one hotel project to-date—a Woodspring Suites in Zionsville. It has another hotel in the works, a Kimpton on a high-profile corner in downtown Indianapolis.

“The town is going to put a lot of pressure on them to continue,” the source said. “With IMS right across the street, this is at the front door to the town. Somebody’s going to make sure that hotel happens.”