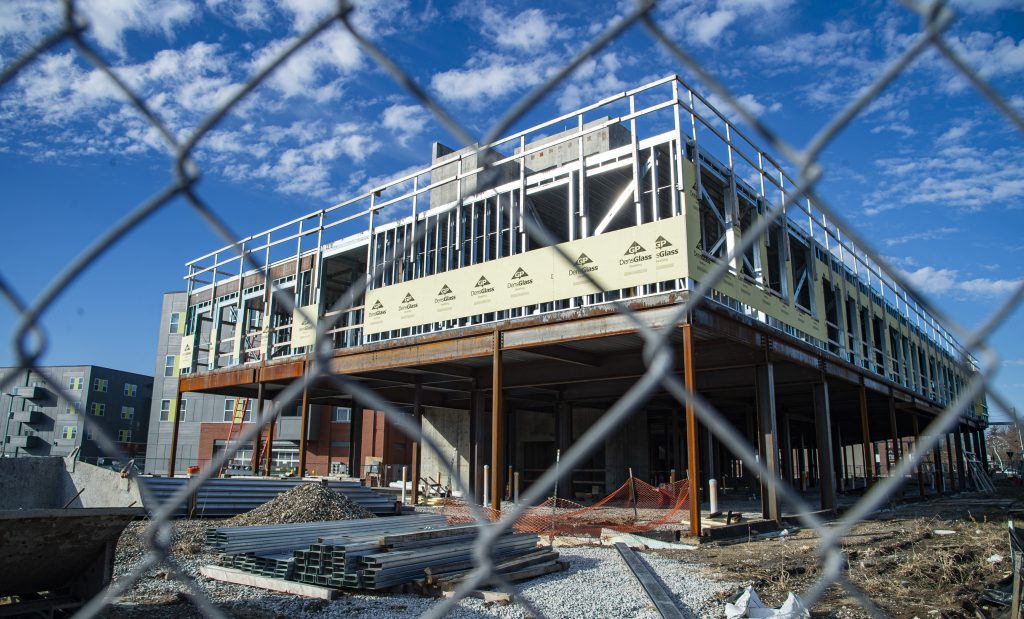 The developer behind a prominent Speedway hotel project is resisting requests from town officials to share details about the development’s status, amid a drawn-out stoppage in construction at the site.

The 126-room Wilshaw hotel at the southeast corner of Main and 16th streets has seen little activity since early July, as Indianapolis-based firm Loftus Robinson awaits its first draw from a $21.1 million construction loan to continue working on the project.

The hotel is the second phase of a $36 million project that also features a 90-unit apartment structure built by Scannell Properties along Main Street, completed last year. The Wilshaw is expected to carry the Hilton Tapestry flag.

The work stoppage has led town officials to express concerns about the future of the project and what could be done to remedy the situation.

The town took its first formal step in getting the project back on track Jan. 3, sending a letter to Loftus Robinson informing the firm it is out of compliance with an economic development agreement the sides signed in 2016. Written notification of non-compliance is required by the agreement.

The letter is one of three pieces of correspondence between the parties obtained by IBJ through a public records request this week.

The economic development agreement—which supports the project with developer-backed bonds to be repaid through tax-increment financing—does not permit construction delays of more than 180 consecutive days. According to the town, it has been nearly 200 days since the last substantive work occurred on the site, in early July 2019.

In its letter, the town asked also Loftus Robinson to provide a catch-up plan for the project, as well as the presence of its principals, Drew Loftus and Kyle Robinson, at a Jan. 13 town council meeting to provide an update on the development.

“The lack of information and delay has been a continuing issue for the Town in trying to respond to questions from the public as to why such a highly publicized development […] is not progressing,” the letter, written by an attorney for the town, said in part.

The document said the completion “of the hotel in a timely manner is essential to ensuring tax increment revenues will be available to service the bonds,” noting that because bonds have already been issued for the project, payments to service that debt will begin next January.

The letter also requested a slew of information from the developer:

— Copies of any and all construction loan draw requests, along with inspections, reports and permits tied to the hotel project;

— Information on the project’s financing, including construction loan details and any equity still needed;

— An updated construction timeline for the completion of the hotel, and confirmation the developer still plans to complete the project no later than January 2021;

— Confirmation the final product will still be a Hilton-branded hotel;

— Confirmation F.A. Wilhelm Construction Co. Inc. remains the general contractor on the project and that Loftus Robinson is able to meet its financial obligations to Wilhelm;

— Loftus Robinson’s plans to ensure sufficient funds are transferred to cover any shortfalls in tax-incremented financing caused by delays to the project;

— And any other information the firm believes is necessary to inform the town of the status of the project.

Town representatives last met with Loftus Robinson on Nov. 14 to discuss a strategy for moving the Wilshaw forward. Representatives for the town and the development firm have discussed the project by phone each week since, a Speedway town official said.

In a Jan. 9 response to the town’s letter, an attorney for the development firm declined Speedway’s information request. The letter also said any assertion the company had violated its project agreement is false, because the Wilshaw’s planned completion date is still set for Jan. 27, 2021—the date established by the document.

The developers argue while the project has been stalled for more than 180 days, the construction timeline has so far not been affected, meaning it still complies with the agreement.

Loftus Robinson officials also declined the request to attend Monday’s town council meeting and make a presentation on the project. A Speedway official confirmed they did not attend.

The town sent another letter immediately after receiving a response from Loftus Robinson that restated its requests for more information and its belief the developer is out of compliance. A response to that letter from the developer has not yet been received, town officials said.

While the project agreement requires the firm to provide a catch-up plan within 15 days of notification of non-compliance, the town’s economic development director Tim Gropp said this week that additional correspondence from Speedway further asserting non-compliance likely won’t be sent out until early February—at least 30 days after the first letter.

If Loftus Robinson decides not to submit a plan by that time, the town would be able to consider other avenues to remedy the situation, according to the development agreement.

Those options include the town developing its own catch-up plan and forcing the developer to implement it; taking possession of the property and completing the project on its own; or purchasing the construction loan for the project.

If the town were to pursue the project on its own, the developer would be required to cover any cost overages to the construction loan, according to the development agreement.

Gropp has previously said the town is keeping “all our options available to us” to resolve the matter, but said officials are hopeful Loftus Robinson will resume work on the project in the coming weeks.

“Obviously, the best and cleanest scenario … is that Loftus Robinson works through their issues as soon as possible and gets back on site as soon as possible,” he said earlier this month. “There is a timeline in place that needs to be met and some of those dates are coming up sooner than we’d like them to.”

Drew Loftus told IBJ in early January that F.A. Wilhelm will stay on as the general contractor for the project. But the firm faces a challenge with its contractors: more than $6 million in unpaid bills, for which Loftus Robinson is facing a handful of mechanic’s liens.

Liens are claims of legal rights to sell a piece of property to pay for a debt owed by its owner, and are standard practice in situations where contractors aren’t paid for work on projects.

Loftus has said his firm is aware of the liens but said those filings aren’t indicative of the company’s relationship with its contractors. Wilhelm officials didn’t respond to a request from IBJ for comment.

The developer did not respond to calls requesting comment for this story.