With a year to go before completion of a 1,600-seat concert hall, Carmel’s performing arts center is hiring key staff.

Executive Director Steven Libman added Jeremy Hatch as development director. Hatch comes from the YMCA of Greater
Indianapolis, where he was senior director of financial development. 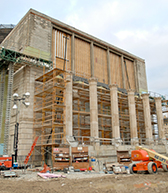 Hatch is also a board member for the Indianapolis Fringe Festival and
involved in the Harrison Center for the Arts.