Home » DINING: Northside Social lives up to its name

And the winner of the Award for Most Aptly Named Restaurant goes to … The Northside Social.

So social was this new Broad Ripple eatery (6525 N. College Ave., 253-0111) on a recent Saturday that it took two courses
before we realized music was playing.

The noise level was actually quite admirable and infectious. The unrecognizable former home of MugShots biker bar somehow
has attracted a boisterous crowd that still wants to have fun in Broad Ripple but has aged out of most of the beer-and-leer
joints. 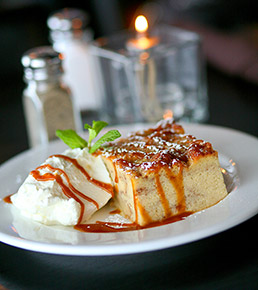 The bread
pudding at The Northside Social in Broad Ripple is destined for “best of” status. (IBJ Photo/ Perry Reichanadter)

With a bar area taking up nearly half the new space and a lounge squaring off another section, diners are pretty tightly
packed into what’s left. After a half-hour wait (accurately predicted by the hostess), we squeezed three onto a two-top
table and quickly dug into plates of Canyon Flatbread ($9) and Butter Lettuce Wraps ($10). The former proved a simple, effective
combo of pesto, pulled chicken, roasted tomato, mozzarella and fresh basil on a disk of toasted flatbread. The latter featured
lettuce a bit too small for stuffing, but a chicken/water chestnut/scallion/wild mushroom filling made the rest worth scooping
up with a fork.

Entrees include a Ground Fresh Ahi Tuna Burger ($14) that was a bit overwhelmed by its toasted country bread but was nonetheless
delicious and nicely accented with pickled ginger and wasabi. It may be a bit early to put “famous” in its moniker,
but Chef’s Famous Beer Brisket ($15) could well get to that point, offering slow-cooked, meaty goodness in a Guinness
sauce that enhanced without overwhelming.

Still feeling social, we dug into desserts. Don’t be surprised to find the substantial Bread Pudding ($6), dressed
with pecan caramel sauce, whipped cream and just-enough powdered sugar, showing up on “best” lists. More surprising
was the Banana Cream Pie ($7), which arrived do-it-yourself style, with the fruit cut lengthwise dividing a plate with a cup
of whipped cream on one side and banana cream and white almond crust crumbles on the other.

The effort to fork a piece of banana and dip it in both added fondue-ish fun—just one of many things to socialize about.•

Last in our month-long series of review of College Avenue eateries.