A mix of business and personal woes have pushed Steven Carter Ross, the longtime owner and manager of the Vogue nightclub,
into personal bankruptcy. 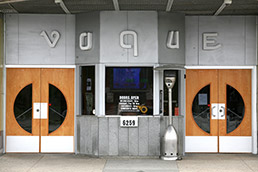 Now a judge must decide whether Ross can keep the popular Broad Ripple music venue, or if he must sell it to satisfy his
creditors and his estranged wife.

“This has been a financial nightmare,” Ross, 55, said.

Ross said the root of his monetary problems is a failed foray into Cincinnati, where he operated a dance club from 1999 until
around 2002. His Chapter 11 reorganization, filed March 19, lists assets of $1.1 million and liabilities of $3.6 million.
The filing overlaps divorce proceedings Ross and his wife, Nishi, have pursued in Marion County since January 2008.

The Vogue, an Indianapolis landmark, debuted in 1938 as one of the city’s first air-conditioned movie houses. During
a rough patch in the 1970s, it operated as an X-rated theater. In 1977, Ross’ brother John purchased the Vogue with
partner Doug Turnbull and renovated it into a live music venue.

Since then, a dazzling variety of famous artists have appeared on the Vogue’s stage,
from Bo Diddley, Sheryl Crow and Dave Matthews to Willie Nelson and the White Stripes.

Steven Ross and partner Dennis Burris bought the Vogue in 1986. The nightclub still does brisk business. Records filed in
the divorce show the Vogue had average annual receipts of $1.8 million from 2003 to 2007.

The Vogue is now his only nightclub, but Ross has owned several others. They included Bloomington’s Bluebird, which
Ross bought in 1981 and sold in 2004; Broad Ripple’s the Patio, which Ross opened in 1987 and closed in 2005; and Electra,
the dance club he launched in Cincinnati.

At first, Ross said, Electra was far more successful than the Vogue ever had been been. But following a controversial police
shooting in April 2001, four days of race riots broke out just a block away from Electra. The neighborhood—and the club—haven’t
recovered. Ross said patrons from the suburbs were afraid to return to the urban location, and Cincinnati officials were deaf
to his pleas for help.

“I lost millions of dollars in Cincinnati, and the city was not there to help me regain what I had,” Ross said.
“They really didn’t care.”

After closing the Electra nightclub, Ross said, he attempted to lease the space, but struggled to find tenants Cincinnati
officials deemed acceptable. He said the building has been vacant since May 2008.

Eventually, Ross allowed the property to slip into foreclosure. In a January 2009 letter, Ross warned his mortgage lender
and the U.S. Small Business Administration that he was not only defaulting on his loans, but was unable to keep paying for
basic utilities.

The largest creditors in Ross’ bankruptcy case all hold claims against Sycamore Gardens Real Estate, Electra’s
holding company. Cincinnati-based Triage Properties, for example, has a $1.2 million claim. The SBA has an $846,000 claim
of its own. Ross bought out his Vogue partner in 2000, but bankruptcy records show he still owes Burris $644,000 on a loan.

The $1.1 million Ross listed as assets in his bankruptcy case includes two local homes and a rental property, $180,000 he’s
still owed from the sale of the Bluebird, several cars and a number of personal items. Ross lists the Vogue’s value
as “undetermined.”

Divorce records show he’s been arguing about the Vogue’s worth with his estranged wife for months. Both have
hired their own professional appraisers. Nishi pegs the value at $1.4 million; he hasn’t disclosed a figure.

Ross said that once he can put the bankruptcy and divorce behind him, he hopes to return his full attention to managing the
Vogue. He said neither the bankruptcy nor the divorce should affect the business or its 40 employees.

That venue is on strong financial footing, he said, with sales up 8 percent last year. He attributes the rise to consumers
looking for entertainment bargains in the recession.

“I learned a long time ago if you run it like a business, chances are you’ll be successful. Indianapolis nightclubs
come and go because the owners think it’s a personal party. But it’s a business and it has to be run like that.”

But the Vogue’s future may not be up to Ross anymore.

Electra creditors will consider the Vogue a valuable asset that could be liquidated to help pay their claims, said Henry
Efroymson, an Ice Miller bankruptcy attorney who has no role in Ross’ case.

Efroymson said Ross will have to prove he can satisfy his debts better by hanging on to the club, rather than selling it
to another operator. The divorce’s division of marital property, now directly tied to the bankruptcy, also will bear
on what Ross gets to keep.

However the ownership struggle plays out, Efroymson said, it’s unlikely the Vogue will close. But until the divorce
and bankruptcy are settled, Ross won’t be able to concentrate entirely on bringing headline acts to his stage, or promoting
drink specials on club dance nights.

“It’s not just that it has a financial impact, but also that all of these legal proceedings misdirect Mr. Ross’
full attention from running the nightclub,” Efroymson said. “They’re diversions. In a perfect world, I’m
sure he wishes he didn’t have to face either.”

The continued success of the Vogue affects the overall health of Broad Ripple. The nightclub draws tens of thousands of people
to the neighborhood annually, said Alan Hague, editor of the Broad Ripple Gazette.

A few years ago, Hague said, he published an April Fool’s issue with a front-page article claiming a bank with reuse
plans had bought the Vogue. The Gazette was flooded with furious calls from readers who didn’t realize the
story was a joke.

“Almost anyone you talk to knows where the Vogue is,” Hague said. “‘Meet me a block from the Vogue.’
It’s the point of reference [in Broad Ripple] you use.”•