Home » Roll of dice turns out nice for Butler’s Stevens 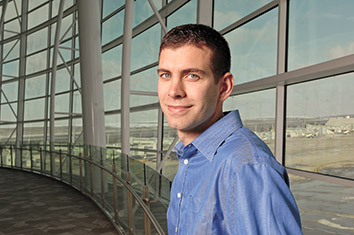 The biggest chance Brad Stevens ever took, the best game plan he ever drew up, had nothing to do with a prized recruit or
some brilliant set of Xs and Os scrawled out on a greaseboard.

Instead, it came on the day he decided to scrap the business route and go all-in with his first love, basketball.

Ten years after he took the chance and quit his marketing job at a pharmaceutical company to get into the coaching business,
the 33-year-old Stevens has led Butler to the Final Four—one of the youngest to ever take a team this far.

MORE FROM
IBJ
For IBJ's
Forty Under 40 profile of Stevens and a video interview with him, click here.

He's also a record holder, with more wins than anyone in his first three seasons as a head coach, at 88 and counting.

At 23, fresh out of college and with an understanding girlfriend who would later become his wife, Stevens went for it.

Nothing overly unique there.

But anyone who's spent any time in college sports knows the progress line for a post-grad assistant rarely points as
sharply upward as Stevens' did.

None of his three coaching counterparts in the Final Four are within 20 years of him. All have been major successes. All
were still paying their dues a decade into their coaching careers.

Mike Krzyzewski, 63, spent three years in his post-grad life serving in the Army and directing service teams. He got a job
as an assistant to Bob Knight in Indiana, then returned to Army for another five years as head coach before heading to Duke,
which didn't become a regular in the big-time until Coach K had been there a while. Krzyzewski's first trip to the
Final Four with the Blue Devils came in 1986, when Stevens was 10.

Bob Huggins, 56, of West Virginia spent the first dozen years of his coaching career bouncing between assistant jobs at big
schools and head jobs at small schools before he got his first whiff of big-time success at Cincinnati.

And Tom Izzo, 55, famously coached at Ishpeming High in the Upper Peninsula, then went to his alma mater, Northern Michigan,
as an assistant, before spending a dozen seasons as Jud Heathcoate's assistant at Michigan State. Izzo took over the Spartans
in 1995.

"I've been very impressed with Brad, how he's handled everything," said Izzo, who may have noticed Stevens
from afar, but now must deal with him on the sideline, Saturday in the national semifinals.

"He seems like a very humble guy—a blue-collar guy with a white-collar way of putting it," Izzo said.

In precisely that manner, Stevens said he never put a timeline or a deadline on his coaching pursuit, even though the money
at the entry level of that profession lands most people below the poverty line.

"I was told by a person at Lilly, early in my time, that the secret is just to do the job to the best of your ability
and don't worry about anything else," Stevens said. "You never put a timeline on anything else, and just try
to do the job you're assigned, and do it well."

To get in the door at Butler, Stevens got then-Coach Thad Matta to hire him as a low-paid administrator. When Matta left,
Todd Lickliter became head coach and made Stevens a full-time assistant.

Lickliter's departure for Iowa at the end of the 2006-07 season put Butler in a bind—without much time to find
a replacement, lest the Bulldogs lose a grip on their recruiting class. Lickliter left on a Monday. Stevens had an interview
on Tuesday, another on Wednesday and a contract by Wednesday night.

Which is how this remarkably fast success story stayed on track.

"We basically had a meeting with our athletic director and told him that we wanted to stay with somebody who was already
there at Butler," senior guard Willie Veasley said. "Coach Stevens is the one he picked. As you can see, that was
a great decision, the right decision. His age doesn't really mean nothing when he coaches because he's just a brilliant
coach. He always sets us up for success in any situation."

He has had obvious moments of coaching brilliance in this tournament, such as when the regional final against Kansas State
was tied at 54, with about 3 minutes left. Stevens called a timeout, called for a backdoor, alley-oop play that had been there
earlier in the game but hadn't worked. This time, it did, and Gordon Hayward took a pass from Ronald Nored for a basket
that started a game-winning 9-0 run.

More notable, though, is Stevens' expertise on breaking down tape and looking at statistical trends to find opponents'
weaknesses.

Despite the age difference between himself and his coaching counterparts this week, it's no given Stevens will be on
the wrong side of a mismatch.

Since the NCAA started keeping thorough records in 1972, only Knight was younger when he brought his Indiana team to the
Final Four in 1973. In records kept before 1972, Ray Meyer was 29 when he took DePaul in 1943, and Branch McCracken was 31
when he took Indiana in 1940.

And if Stevens wins? Well, it would be hard for any of the other Final Four coaches to give their players as good a high-flying
chest bump as Stevens did in the post-game celebration last Saturday.

"As I've grown older, I appreciate what I had at Lilly even more than I did back then," he said. "It's
not like life was bad. It was just one of those things where I wanted to take a shot and see what happens."