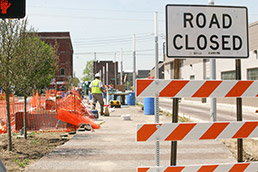 Work is underway on a record $88 million in transportation improvements in the city due to federal stimulus grants. (IBJ
Photo/ Perry Reichanadter)

The city’s Department of Public Works plans a record $88 million in transportation improvements, including road, bridge
and sidewalk projects. At least $23 million of that is coming from federal stimulus funding.

The work amounts to 97 lane miles of street repairs and paving and five bridge projects.

Among projects are Raymond Street, from Shelby Street to Southeastern Avenue; both Arlington and Emerson avenues between
38th Street and 56th Street; and Mooresville Road from Southport Road to Nolte Street.