A controversial Massachusetts Avenue apartment and retail project is poised to proceed thanks to the addition of an underground garage meant to allay neighbors’ concerns about parking. 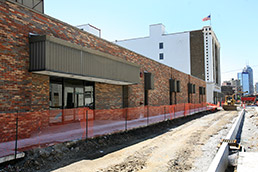 The building at 875 Massachusetts Ave. would be demolished in early fall, with construction following shortly thereafter. Trail Side should be open by fall of 2011. (IBJ Photo/ Perry Reichanadter)

Trail Side on Mass Ave, a $10 million project at 875 Massachusetts Ave., cleared its last government hurdle May 5 when it won unanimous approval from the Indianapolis Historic Preservation Commission. Developers had expected approval a month earlier. Instead, the commission sent the developers back to the drawing board to come up with a new parking plan.

Approval of the revised plan should allow the Riley Area Development Corp. and its partner in the project, Monument Realty, to proceed with the four-story building, which would replace a vacant, one-story structure owned by the Center Township Trustee.

Trail Side is to include 69 one-bedroom apartments and 10,900 square feet of first floor retail space. The developer had proposed 23,000 square feet of retail space, but the amount was reduced to accommodate office space and community meeting space that was to have been provided in the building’s basement. The basement of the building will instead house a 69-space parking garage, satisfying the demands of a property owner and retailers across the street who wanted the project to include more parking. A surface lot behind the building will accommodate 25 more spaces.

Tom Battista, whose commercial building across the street houses the popular R Bistro restaurant and other retailers, had led opposition to the Trail Side project. He cited inadequate parking as a threat to the economic interests of his tenants.

The change in the Trail Side plan “diminishes our concerns a lot,” said Battista, who dropped his opposition based on the change. Battista praised the addition of parking and the retention of retail space on the first floor. “They are going to do the right thing now.”

Bill Gray, Riley Area’s executive director, said it’s likely his group will move its offices to Trail Side from the Davlan, a building in the 400 block of Massachusetts Avenue. Riley Area and Monument Realty previously redeveloped that building with a mix of apartments and retail space.

Gray said Riley Area has agreed to a long-term land lease with the Center Township Trustee’s Office, which owns the project site. He said final details of that lease are being negotiated but aren’t expected to delay the project.

IHPC already has approved the demolition of the building that must be removed to make way for Trail Side. With the broader project approved, Riley Area will likely close in July on the sale of the tax credits being used to finance the project, Gray said.

Demolition of the existing building would take place in September or October with construction following shortly thereafter, Gray said. He anticipates being able to lease apartments and retail space beginning in fall of 2011.

Trail Side apartments are to rent for $325 to $700 a month to tenants with incomes between 30 percent and 60 percent of the median income.

Trail Side is so named because of the Indianapolis Cultural Trail, the northeast segment of which will run along the front of the building. Construction of that leg of the trail is in progress.•