Indiana Landmarks appeared to be playing the familiar role of savior last fall when it swooped in to win landmark designation for a nearly 100-year-old church on the east side at risk of demolition.

After all, the designation effectively killed the church’s negotiations to sell the property to a developer representing CVS, which planned to build one of its ubiquitous cookie-cutter drugstores. 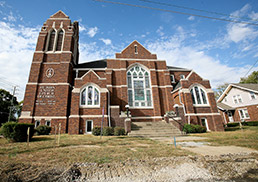 Leaders of St. John United Church of Christ nearly had a deal to build a CVS on the site. (IBJ Photo/ Perry Reichanadter)

But that’s not how leaders of the church, the St. John United Church of Christ, see it, and they’re fighting back with a federal lawsuit saying the designation by the city’s Historic Preservation Commission violated their constitutional rights to freely exercise their religion.

The suit, filed Sept. 10, says the existing church is outdated and in disrepair and that its 95 regular attendees—85 percent of whom are over age 65—lack the means to pay the more than $1.3 million in utility bills, upkeep and capital improvements needed over the next decade.

Church leaders had planned to use the property sale to fund a new church, costing as much as $3 million, that would feature a nursery, a multipurpose room and other amenities needed to draw young families and restore the church’s vibrancy. The church already owns land for the new church at Prospect Street and Carroll Road.

“The effect of the landmarking is to seriously damage the congregation and also virtually ensure the building will become a ruin. There is simply no way to preserve it, given the financial resources of the congregation,” said Robert L. Greene, an attorney representing the church with Washington, D.C.-based Storzer & Greene. The firm specializes in trying religious land-use cases nationwide.

The suit says the landmark designation prevents demolition, though Marsh Davis, president of Indiana Landmarks, says the church could try to make its case to the HPC that such a drastic step was justified for financial reasons.

Everyone involved in the dispute agrees the church, at the northeast corner of Washington Street and German Church Road, has a rich history.

It opened in 1855, initially serving German immigrants who farmed the surrounding area. That structure was replaced later that century, and the current building opened in 1914.

But church members have more immediate concerns. The congregation has shrunk from 542 members in 2005 to 366 today, according to the lawsuit, and only 178 are active. Worse, only 114 members contribute financially.

“The church building will of necessity become a vacant structure within the next 10 years because of the church’s lack of financial means to maintain and repair it,” the lawsuit said.

Talks soon became serious. It was a natural spot for a CVS. A Walgreens sits across Washington, as does a Walmart Supercenter and Marsh grocery store. According to the lawsuit, church officials hoped to execute a contract with CVS in January 2010, with closing later in the year.

But historic preservationists had other ideas. The church sits in Marion County within the town of Cumberland, which straddles the Marion-Hancock county line. According to the lawsuit, the historian for the town of Cumberland got wind of the CVS negotiations, and in September Historic Landmarks jumped into the fray, filing an emergency request for historic designation by the city.

The designation derailed discussions with CVS, the suit says, and made the church’s property far less valuable. St. John argues the HPC violated its rights under the First Amendment and the equal-protection clause of the 14th Amendment, and that its interference with the church’s business relationships violated Indiana law.

St. John is asking the court to rescind the historic designation and award unspecified damages. Anything less, the suit says, would prevent the church from fulfilling its Christian mission of bringing in new families.

“The church believes it has a fundamental duty to reach out to all persons in Christian love and service as directed by Jesus in Mathew 25:40, where he said, ‘I will tell you the truth, whatever you did for one of the least of these brothers, you did for me.’”•