Sphere of Influence: As one of the nation’s leading perinatologists (caring for both the mother and fetus during pregnancies with a higher-than-normal risk of complications), Dungy-Poythress has “put Community on the map” as a leader in this highly specialized but critical field. She’s director of Maternal-Fetal Medicine at Community Health Network, and serves as a clinical consultant for Perinatal Perspectives, a publicaion of the Indiana Perinatal Network. 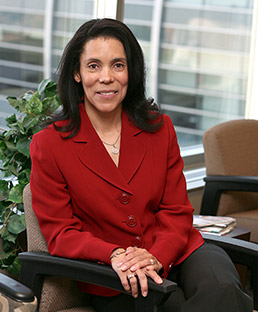 Everyone, at some point, is advised to follow their dreams. But members of Dr. Lauren Dungy-Poythress’ family took that old chestnut very, very seriously—and none more seriously than she. The younger sister of former Indianapolis Colts coach Tony Dungy, she’s made a name for herself as one of the nation’s leading perinatologists. All because when she was a teenager her father, the first African-American professor at Jackson Community College in her hometown of Jackson, Mich., asked if she might consider becoming a doctor.

Dungy-Poythress undertook that challenge at a time when there were few female African-American role models for such an endeavor. By succeeding, she became a role model herself.

“A core message instilled in my siblings and me by our parents continues to serve as a theme for me as I speak locally and nationally,” says Dungy-Poythress, 48. “It is important for people to develop and follow their dreams. Where there is no vision, the people perish. We need to strive to be the best we can be, and not give up when things get difficult.”

In addition to serving as medical director of Maternal-Fetal Medicine for the Community Health Network of Indianapolis, Dungy-Poythress works with numerous programs relating to prenatal care. She’s honorary chairwoman for the Indiana Healthy Babies Consortium; a spokeswoman for the March of Dimes; and a board member for the Julian Center. She’s also a well-known motivational speaker who makes a point of encouraging young women to aspire to great things—things they might not have considered on their own. On one occasion she inspired a young woman maintaining a 4.0 GPA in an undergraduate nursing program to go to medical school.

As for her own professional world, Dungy-Poythress sees the demands on her management skills increasing as reforms sweep the world of medicine. “One of the biggest challenges will be keeping my staff focused, especially in this era of new health care reform,” she said. “I remind them that change is inevitable and that we must embrace it—and not fear change. We have to continue to provide competent, confident, compassionate, and consistent care to our patients and referring physicians.”

In her spare time Dungy-Poythress sticks close to her family: husband D. Wesley Poythress and daughters Lauren Danae, 12, and Davia, 9. Not surprisingly, she enjoys football.
___