Sphere of Influence: The daughter of former Indianapolis Star publisher Eugene S. Pulliam keeps busy with a broad slate of local and international philanthropic efforts focused on everything from conservation to investigative reporting. 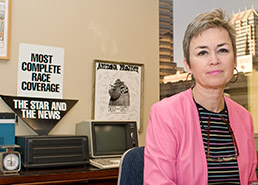 Myrta Pulliam’s charitable efforts are as varied as her interests, which include animals, conservation, art, photography and investigative journalism.

One of her proudest achievements is her work on the Indianapolis Prize, for which she was formerly the chairwoman and now serves as prize chair. Established by the Indianapolis Zoo, it is arguably the world’s leading award for animal conservation. It offers a biennial, unrestricted $100,000 payment (funded by Eli Lilly and Co.) to an individual animal conservationist making significant achievements in advancing the sustainability of an animal species or group of species. “This year it’s now seven years old,” Pulliam said. “I’ve seen it go from inception or creation to a world-recognized award.”

But it’s only one of the various efforts of which she’s part. Pulliam just wrapped up two years as chair of the Board of Governors of the Indianapolis Museum of Art. She also sits on the board of the Indianapolis Zoo, on the board of trustees of DePauw University and Queens University of Charlotte, and on the boards of the Methodist Health Foundation and the Central Indiana Community Foundation. It’s been a hectic time for such organizations, given the economy.

“The recession manifested itself everywhere,” Pulliam said. “More need in the community and fewer dollars. Smaller endowments, which therefore meant budgets had to be cut. And a general rethinking of priorities by organizations—which hasn’t been all bad.”

Through it all, the granddaughter of self-made publishing magnate Eugene C. Pulliam, hasn’t forgotten her journalistic roots. In 1975 she founded Investigative Reporters and Editors (IRE), a grassroots not-for-profit dedicated to improving the quality of investigative reporting. A former board member, she remains on the IRE Endowment Committee.

Though her family sold its interest in the Indianapolis Star to Gannett in 2000, Pulliam still works at the newspaper one day a week. The rest of her time is devoted to civic and philanthropic endeavors.

“We all need to give back to the community,” she said. Pulliam has even put her father’s name on a couple of brick-and-mortar projects—something she thinks he was too private ever to have done for himself.

In her spare time she still writes travel pieces, tutors, gardens and engages in photography. She has four dogs, plus nieces, nephews, cousins and friends.
___