The amount of money banks loaned through U.S. Small Business Administration programs shot up close to 30 percent in Indiana this year—a sign that the state’s small businesses have slowly started coming back to life.

Small companies are taking out more SBA loans not just to fund operating costs, but also for capital projects such as expansions. Entrepreneurs also are investing in startups, which accounted for about a quarter of the SBA loans issued in the fiscal year 2010 that ended Sept. 30. 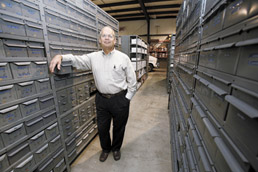 Pat Wolfred, co-owner of CCA Inc., in the warehouse of his small business, which bulked up its credit as sales rebounded. (IBJ Photo/ Perry Reichanadter)

The climb to about $340 million spread across 1,322 SBA loans was driven, experts say, by a combination of government incentives, bargain-basement real estate prices and a climate in which businesses and banks alike were more confident about borrowing and lending.

It signals a rebound from a particularly dismal 2009, when SBA loan dollars statewide had dropped 13 percent from 2008 levels, to $267 million through 1,035 loans.

The rebound has not brought the state’s SBA lending levels back up to the recent peak of $382 million in 2007. And while it’s too soon to tell whether the growth will translate into job creation, it’s an indication that small businesses are producing, remodeling and, in some cases, growing.

“Now we have the first small signs that investment will ultimately pick up,” said Andreas Hauskrecht, a clinical associate professor of business economics at Indiana University’s Kelley School of Business. “I see this as a little spring flower, but it’s not summer yet.”

Big banks back in game

Incentives from the federal government, including backing a larger percentage of loans and waiving fees, coupled with a push from the SBA to make the process more accessible, helped drive up SBA loan activity.

Participation in SBA lending among some of the big banks dropped off sharply in 2009, leaving it up to smaller community banks to carry the torch.

This year, community banks are “continuing to show interest,” said Gail Gesell, the SBA’s Indiana District director. But larger banks such as Chase, Huntington and Fifth Third renewed their activity, helping to drive the loan volume up.

Officials at some of those banks say they made a concerted effort to lend to small businesses.

Banks such as New York-based Chase and Columbus, Ohio-based Huntington have bulked up their small-business lending staffs. That has allowed them to spend more time scrutinizing loan applications and finding ways to offer loans to clients that may not have qualified at first glance.

“We really had our sleeves rolled up,” said Mike Newbold, president of Huntington’s central Indiana region. “We believed there was a way to go out and use this down economy as a way to get closer to our customers and potential customers.”

Bank of Indiana tried to carve out a niche by offering an SBA-backed revolving line of credit. The bank also capitalized on the caution of some large national banks that were shedding or downsizing credit lines for customers in 2009, said Jeff Salesman, the bank’s senior vice president.

“A lot of the larger banks went through their credit portfolios and put the burden on these small businesses to find other homes quickly,” Salesman said.

On the other side of the equation were small businesses with demand for credit.

But CCA’s bank had cut the firm’s line of credit when the company, which brings in $5 million in annual sales, had to reduce its inventory and cut a third of its 12-person staff earlier in 2009.

So in January of this year, CCA secured a new $400,000 line of credit from Huntington backed by the SBA.

Other business owners are investing by making improvements.

Scott May got an SBA-backed loan this spring to remodel one of his two Indianapolis Laundromats, Courtesy Cleaning Centers, and add new machines at both facilities.

For now, he’s not planning to expand, but he thinks his investment will help grow his business at the existing facilities.

“A lot of businesses are scared right now, and it’s definitely scary,” May, of Terre Haute, said of the current economic climate. “At the same time, you’ve got to forge ahead.”

About $268 million—or 79 percent—of the SBA loans issued this year were in the 7(a) program, which funds a broad range of needs, from operating costs to expansions and improvements.

Gesell of the SBA said the fact that volume among 7(a) loans grew 5 percentage points more than the growth rate in number of loans indicates those loans are financing more than just working capital.

“Our increase in the size of the loans suggests that a lot of small businesses are purchasing major assets,” Gesell said.

Another indication of capital investment: The SBA’s 504 program, which is specifically for long-term purchases such as construction of new facilities or large equipment, saw about 8 percent growth in loans, to $71 million statewide.

David Amick is executive director of Premier Capital, one of a handful of not-for-profit certified development corporations that partner with banks to provide part of the financing for 504 loans.

He said after a year of cutting back, more businesses were in a position to invest this year. And the low interest rates and real estate prices provided incentive to do so.

“Small businesses who survived in 2009 have some liquidity because they cut people and expenses,” Amick said. “Now they’re taking advantage of incredible, historic low rates.”

Despite some of the positive signs, questions remain. Among them is whether the added activity made a dent in unemployment.

The increase in SBA loan volume nationally was similar to Indiana’s—about 30 percent.

But as of the fourth quarter last year, the most recent for which national data shows job gains and losses by business size, companies with less than 500 employees accounted for about 87 percent of the 275,000 job losses. The same kind of data for that time period is not available at the state level.

Jerry Conover, director of the Indiana Business Research Center, said the growth in SBA lending is mostly a reflection of greater willingness—spurred by federal incentives—among banks to lend.

“There was more opportunity to borrow money,” Conover said, “and as a result borrowing went up.”

What also remains to be seen is whether such borrowing will continue next year. Gesell said loan volume in October was up 73 percent over the same month last year, but that could be due in part to federal incentives that were renewed in September. Those incentives are due to sunset at the end of the year.

She said there are other anecdotal positive signs, such as interest in receiving business counseling, and she’s expecting to exceed 2010 loan levels next year.

CCA’s Anderson expects to bulk his staff back up to 12 employees by the middle of next year.

“We’re still pretty conservative here,” Anderson said “But there’s a difference between being conservative and being locked down. That’s an extremely frustrating situation.”•