A number of local arts professionals are making the jump from Indianapolis to the Center for the Performing Arts in Carmel, which will unveil its Palladium concert hall in January.

Carol Baker has left the Indianapolis Symphony Orchestra, where she was director of education, for a similar job in Carmel, according to a recent announcement from the performing arts center. Before joining the ISO, Baker was director of volunteer and audience relations for the Actors Theatre of Louisville. 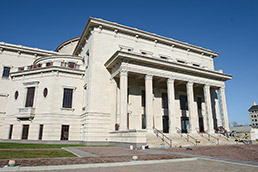 Lee Davis, who was event manager at Clowes Memorial Hall, is one of the Carmel center’s new front-of-house managers. At Clowes, she directed all front-of-house staff, including 250 volunteers, and was responsible for patron care, safety, service, contract security, concessions and catering.

Another new front-of-house manager is local actress Maria Eglan. She has worked in house management at The Shakespeare Theater of New Jersey. Currently, she’s playing Dorothy in a “Wizard of Oz” play at The Children’s Museum of Indianapolis.

The center’s new individual and corporate giving officer, Emily Lovison, comes from a different not-for-profit sector. She was development director at 100 Black Men of Indianapolis.