The only bank branch location PNC Bank is selling in Marion County after its purchase of National City Bank has been purchased by C.H. Douglas & Gray Wealth Advisors.

“We were sort of stepping all over each other” at the current location, said Chris Douglas, managing director of the firm. 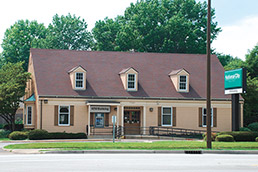 A $200,000 renovation of the building, built in the 1980s, will start immediately. The firm expects to move in May. Douglas said the intent is to use high-quality finishes to give the new office the feel of homes in the nearby Arden and Williams Creek neighborhoods.

Colliers International broker Tom Osborne, who represented both PNC and Douglas’ firm in the transaction, said National City Bank closed the branch in late 2009. He said it was a popular listing, even in a bad economy, and had been under contract three times before C.H. Douglas & Gray bought it.