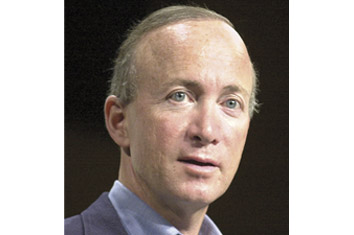 Indiana Gov. Mitch Daniels says the United States is facing a new "red menace" — debt, not Communism — and conservatives must be realistic in cuts.

Daniels, a potential 2012 presidential candidate, said Friday during a speech at the Conservative Political Action Conference in Washington, D.C., that the United States must get its finances in order or avoid slipping into a shadow of its former self. Daniels, who served as President George W. Bush's White House budget director and was an aide in the Reagan administration, says U.S. "fiscal ruin" would only benefit other nations.

Daniels says groups such as the Conservative Political Action Committee must unify behind a realistic plan to address the nation's debt. He says ending earmarks alone won't solve the problems and saying that cutting "waste, fraud and abuse" only trivializes the challenges.