City officials have pinned a stop-work order on an unapproved façade project along Washington Street.

The owners of 42 E. Washington St., a four-story brick building erected in 1880, had been filling in the window openings with concrete block.

Dino Antonopoulos told IBJ his family—which has owned the building since the late 1970s—has no immediate plans for a renovation of the building, but he wanted to seal the windows to keep out moisture after a few bricks fell from the façade. 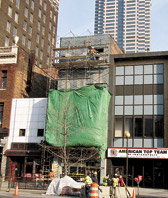 He planned to cover the blocks—and the rest of the brick façade—with plaster. Smaller window holes would be cut as part of an eventual renovation. The building’s upper floors are unusable in the current state, but the first floor is home to a jewelry shop.

But the Antonopoulos family failed to file for the required Regional Center Approval for changes to the façade or window openings, city officials said. The Department of Metropolitan Development had only given the building owner permission to repair the upper part of the façade because of safety concerns about falling brick.