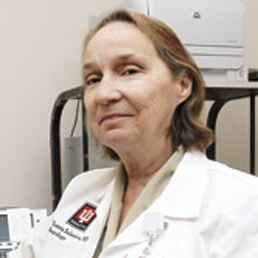 Epilepsy, a disorder that causes incapacitating seizures, affects three million Americans. Sixty percent of them respond to medication. “Those are the lucky ones,” said Vicenta Salanova, M.D., director of the Indiana University Comprehensive Epilepsy Center.

For the remaining 40 percent, the disease imposes limitations that severely impact the quality of their lives. They aren’t allowed to drive or swim and may not be able to work. They are prone to accidents, such as falling or drowning. They typically have significant psycho-social problems, and 30 percent experience depression. They are also at risk for SUDEP—sudden unexplained death in epilepsy.

Some patients in this group, the ones for which only one area of the brain contributes to the seizures, are candidates for surgery. For the rest, clinical trials represent their only hope.

These are the patients that come to Salanova, 66, the principal investigator for epilepsy clinical trials at IU Health’s University Hospital. A native of Spain, Salanova came to the U.S. in 1972 for her neurology training and joined the staff at IU in 1991.

Under Salanova’s leadership the center, the only Level 4 epilepsy center in Indiana, participated in the multi-center SANTE Clinical Trial, which showed that electrical stimulation of the thalamus gland was effective. It is awaiting FDA approval.

The groundbreaking NeuroPace RNS System Clinical Trial was also found to reduce the frequency of seizures and has been submitted for FDA approval. A recording device implanted in the patient’s scalp detects the onset of a seizure and sends a mild electrical stimulation to suppress it. The treatment is significant because it can be used in patients with multiple areas of the brain involved in the seizures.

“This is the first time this has ever been done,” Salanova said. “I can see the seizures and the electrical activity of the brain and program the stimulator specifically for the patient so he can suppress the beginning of the seizure before it spreads to the rest of the brain—before he feels anything. We are really excited about both these trials.”

The center is gearing up for participation in the international ROSE trial, which will compare standard open-skull surgery to the less-invasive Gamma Knife radiosurgery, an outpatient procedure. The center conducted the pilot study for this trial years ago.

“We hope that we can show that radiosurgery is another option, Salanova said. “We will follow patients for several years to see not only if radiosurgery is efficacious, but how it affects verbal memory over time and the psycho-social aspects.”

Salanova won’t stop until those questions are answered. In the end, it all comes back to the patients. “We do this research so we can help more patients and improve their quality of life” she said.

“Dr. Salanova has many heroic qualities, but among them I would specifically mention that she is hands-down the most dedicated physician I know,” said Robert Worth, M.D., a neurosurgeon who works closely with Dr. Salanova. “For example, during the recent ice storm she stayed several nights in a downtown hotel so that she would not take a chance on being unable to attend to a patient who was in the hospital for a critical monitoring procedure.”•