ExactTarget, one of the city’s largest technology firms, has landed on the list of The Wall Street Journal’s top 50 venture-funded companies.

The Indianapolis-based company ranked No. 40 among startups valued at under $1 billion with the potential for technological breakthroughs and greatest promise to succeed.

ExactTarget develops software for e-mailing, social media and mobile media marketing. It has about 800 employees. 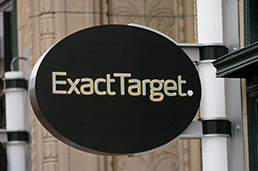 Despite shelved IPO plans, ExactTarget has attracted more than $150 million from venture firms on the coasts. (IBJ File Photo)

It was founded 11 years ago by local tech entrepreneurs Chris Baggot, Scott Dorsey and Peter McCormick.

In January, the other big twin-pillar of local tech firms—Aprimo Inc.—was bought by Dayton-based Teradata for $525 million.