The Indianapolis Indians have added a pair of sponsors, and officials for the AAA minor-league baseball franchise are reporting they’ve grown sponsorship revenue from $1.6 million in 2010 to $2 million this year.

This month, Indians officials announced sponsorship deals with Indiana Farm Bureau Insurance and PNC Bank. Financial terms of the deals were not disclosed, but Indians General Manager Cal Burleson said both are among the biggest sponsorship deals the team has. 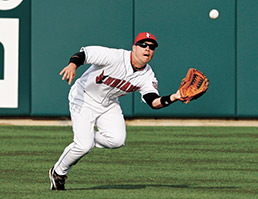 Indiana Farm Bureau signed a multiyear deal that makes the insurance company the “Official Insurance Provider of the Indianapolis Indians.”

The partnership is part of the rollout of Indiana Farm Bureau’s new advertising campaign, and will aim to teach people more about the types of insurance coverage the company offers, said Farm Bureau Senior Vice President Thomas J. Faulconer.

The deal includes in-park signage and commercials during all 72 Indians games broadcast on Comcast and Brighthouse local cable television networks.

The Indians have doubled sponsorship revenue since 2007, Burleson said. In that time, many professional sports teams have struggled to maintain sponsorship levels as the economy has sputtered.