If Bubba behavior is any indication, the economy might be creeping back to life, at least as measured in car sales at the Mecum collector car auction at the Indiana State Fairgrounds last month. 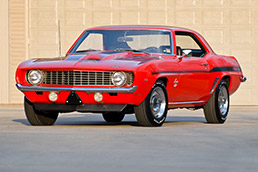 Camaros were among cars fetching the highest premiums at the Mecum collector car auction last month at the fairgrounds. (Photo Courtesy Mecum Auctions)

Throw in other sales, such as those from an inaugural memorabilia auction, like the $20,000 Chevrolet Super Service sign for which someone paid $20,000, and the total spent at Indianapolis was $51.1 million.

The Mecum events draw a mix of auto enthusiasts and professional car collectors.