The main entrance to downtown’s M&I Plaza is getting a $1 million makeover as the 28-story building prepares to welcome two new restaurant tenants.

King David Dogs plans to take a prime street-level space along Pennsylvania Street that over the years has been home to the gym Curves and fast-food restaurant Hardee’s.

King David is moving from its current home about a block south of M&I Plaza, also along Pennsylvania Street. 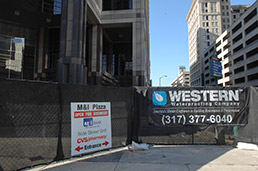 A new entrance with enhanced landscaping is in the works. (IBJ Photo/ Perry Reichanadter)

Meanwhile, the former home of Sahm’s at the Plaza will serve as a new location for Side Street Deli & Grill, which has locations at 20th and Illinois streets and near East 86th Street and Keystone Avenue.

The building’s owner, White Plains, N.Y.-based True North Management Group, plans to install a new entrance plaza for the building with granite pavers and enhanced landscaping stretching along Ohio and Pennsylvania streets. The pavers will extend to the street.

Completion of the project is scheduled for September.