According to a study done by local media firm Borshoff, Butler University earned $512 million worth of media exposure thanks to the school’s back-to-back runs to the men’s basketball NCAA Championship game. 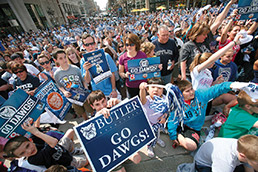 Butler University men’s basketball team was mentioned on television more than 7,600 times during the final two weeks of the 2010 and 2011 NCAA tournaments. (IBJ File Photo)

The study monitored any type of mentions for Butler on every social media platform, as well as YouTube.