By the end of this year, drivers of plug-in electric cars should be able to “gas up” using 76 charging stations at 38 locations statewide, says Indiana’s plug-in car initiative.

The only thing missing might be the cars themselves. 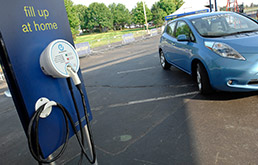 Such is the brave new era of automotive technology, one paved with taxpayer grants until market forces can provide validation.

“These are needed to really bring electric vehicles into the mainstream,” said Paul Mitchell, president and CEO of Energy Systems Network, the initiative of the Central Indiana Corporate Partnership focused on developing the state’s clean tech sector.

IBJ.COM EXTRA
See how far each plug-in car will get you on one full charge.

ESN is commissioning the charging stations using $1.9 million in federal stimulus grants awarded through the state’s Office of Energy Development.

Think plug-in electric car in Indiana and one might think of the “Think” car.

The four-seat, pure-electric vehicle is about the size of five curbside trash bins and features just about as much plastic.

The Norwegian car maker skidded into bankruptcy recently, but appears to have been rescued by new investors. Think cars have been used mainly in electric utility fleets locally, by the local operation of battery maker Ener1 and by a handful of individuals who purchased them from Tom Wood Automotive.

But later this year, mainstream automakers will begin to roll out their plug-in electrics in the Indianapolis market.

They include the much-hyped Chevrolet Volt (it also has a back-up gasoline engine that acts as a generator) and Nissan’s pure-electric four-door, the Leaf.

Nissan brought a truckload of Leaf cars to the Indianapolis Motor Speedway over Labor Day weekend to give motorists a chance to drive them and ask questions.

The five-passenger car that does about 100 miles on a single charge rolls away in virtual silence, without the humming or high-tech whining sound one hears when driving an electric golf cart or some other electric cars. 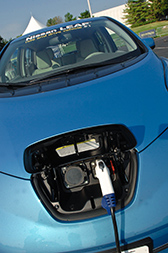 Absent the roar of a gasoline engine and the transmission shudder of a conventional car, the Leaf can accelerate to 55 mph with frightening imperceptibly.

“This [silence] is the thing that shocks everybody,” said Abe Quigley, part of the Nissan team.

Of course, Quigley was using “shocks” in a figurative sense to describe the car driven through a tired corridor of Eagledale.

The Leaf starts at $35,200. A federal tax credit could knock that down to around $29,700. Leasing might be Nissan’s best tactic to get drivers behind the wheel. The Leaf will lease for $369 a month for 36 months.

That’s if you can get one.

Nissan won’t begin accepting orders from Indiana residents until sometime later this year. The process involves little more than filling out a form online and placing a $99 refundable deposit.

Lucky customers will pick up a Leaf at the dealer three or four months later. Quigley’s tip for getting near the top of the list is to sign up for the Leaf mailing list first.

Demand for the Leaf already is such that some dealers don’t expect sufficient numbers to stock their lots for three years, said Tom Covey, sales manager at Ed Martin Nissan.

“I just had a guy in my showroom 15 minutes ago asking about one,” said Covey, who has already taken all the classes on the Leaf.

As for maintenance, there isn’t much, and that should play into Nissan’s marketing pitch. There’s no oil to change, no transmissions to service, or belts to replace, Quigley said.

You wouldn’t know it looking at the “engine” under the hood, where there appears to be the usual intake manifold sitting topside. It’s actually a cosmetic trick that conceals electric motor components such as a power inverter.

What is different are two charging ports in the front grille of the Leaf, under a trapezoidal panel that flips up. The larger round receptacle on the left accepts a plug carrying 240 volts. In the new language of electric vehicles, this is sometimes referred to as a “Level 2” charging port. It charges the car, from “empty,” in about seven hours.

A smaller receptacle, on the right, accepts a 120-volt input and essentially acts to trickle-charge the vehicle. From empty, it would take about 18 hours to charge this way.

There’s an optional, fast-charge port available on some Leaf models that accepts a 440-volt DC plug and charges in as little as 30 minutes.

So what will plug-in electric car drivers find around Indiana?

Of the 76 charging units Energy Systems Network expects to be installed by year-end, 73 will be the so-called Level 2 units—the 240-volt charge.

Level 2 units are pretty much the standard charging method for electric cars such as the Leaf, the Volt and Mitsubishi’s upcoming MiEV electric sedan, said Tom Schafer, a senior vice president and general manager of Cleveland-based Eaton Corp., which is supplying many of the chargers in Indiana.

Indiana is slated to have three of the DC fast-charge units installed by year end, said Tim Pulliam, project manager for Energy Systems Network. Certain Leaf and MiEV models can plug into this faster type of charging station.

Many of the stations are slated for shopping centers and malls, with announcements of specific locations expected within weeks.

Indianapolis’ four existing public charging units can be found in the Denison Merchants’ Garage at 31 S. Meridian St. and in state parking garages. The units are owned and operated by Indianapolis Power & Light.

IPL plans to install up to 150 charging stations by the end of 2012, including at the Indiana Convention Center, the Jewish Community Center, at a library branch, and on the three-block stretch of Georgia Street downtown that’s in the process of a makeover.

As of July, IPL had installed 24 units in homes, 17 at individual businesses, and the four public stations, said company spokeswoman Crystal Livers Powers.

Duke Energy, the largest utility serving the state, has plans for 125 stations, including 90 at residential locations and 35 in commercial spaces, said utility spokesman Lew Middleton.

“We are in negotiations with some large retailers in central Indiana.”

Exactly how electric car motorists will pay for a charge remains in flux.

IPL’s charging stations at the Denison garage charge a flat fee of $2.50 per session. But Mitchell sees a scenario where owners of shopping centers and malls cover the tab—if only to encourage EV drivers to come inside to spend money shopping while their vehicles charge.

“What’s exciting about this is, we can see what the market wants,” Mitchell said.

That infrastructure, which isn’t imminent, could be installed by the private sector. Those stations would give motorists taking long trips assurance a fast-charge station would be available to top off batteries while they eat lunch or take a potty break.

“I think you can imagine a world where quick-charge stations replace gas pumps,” Mitchell added.

Until then, and until battery technology advances to improve range, one solution to the range-anxiety issue will be teaching motorists how to drive efficiently.

Punch a button on the Leaf’s display screen and a pie chart pops up to show how the car is allocating its battery charge—such as what percentage is going to propulsion and what chunk is going to run the air-conditioning and radio.

After turning off the air-conditioning, a number on the dash displaying how many miles remain on the current battery charge increases 10 miles.

There’s also an “eco” mode, which, when switched on, retards such activities as the rate of acceleration from a stoplight.

Run the batteries down too low and the Leaf’s computer begins to automatically shut down other sources of electricity consumption, such as the radio, to extend range.•