The event was to include a tour of the site, which is wedged between 16th Street and White River near Harding Street, and speeches from Mayor Greg Ballard, Indiana Landmarks President Marsh Davis and Bruce Schumacher, director of special projects for the Indianapolis Indians. 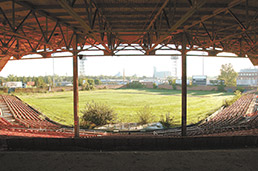 Bush Stadium was home to two different Indianapolis teams over its 65 years. Overgrown with weeds in this 2007 photo, it closed in 1996. (IBJ File Photo)

The stadium opened in 1931 as home to the Indians and, in the 1940s and 1950s, to the Negro League’s Indianapolis Clowns. The Indians moved to Victory Field in 1996. Bush Stadium is listed on the National Register of Historic Places.

Preliminary work is set to begin in coming weeks on converting the stadium into 268 units, whose rents will range from $480 to $1,400 per month. The stadium’s façade will be preserved.

Developer John Watson is leading the $23 million project, which will get $5 million from the city.

Ground breaking is scheduled for next spring, and the project is expected to be complete by August 2013.