Sphere of influence: The first female dean in the 169-year history of the law school has raised tens of millions of dollars, improved the caliber of students and moved the school into the top 25 in the nation.

Lauren Robel has brought the Indiana University Maurer School of Law a long way since becoming the first female dean in the school’s history in 2003. But one of the accomplishments she’s proudest of is not likely to make headlines: making the school family-friendly.

She has introduced flexible schedules, remote-work options and other special offerings for staff members and students with small children.

“I always felt that an institution that was really sensitive to those issues and willing to be flexible and not dogmatic in the ways it approached them would be able to recruit spectacular people,” said Robel, 57. “Female human capital is under-utilized because organizations are inflexible.” 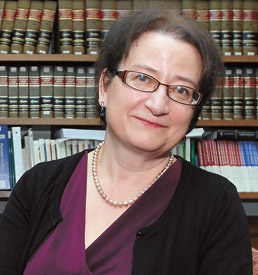 The strategy has worked, Robel said. The school has developed a faculty of “brilliant teachers and scholars,” many of whom have young families. By giving staff members flexibility during their early family years, she hopes to inspire loyalty that will lead to high retention.

Some of Robel’s other accomplishments as dean are more tangible: She has raised $93 million for the school, which has increased annual scholarships from $2 million to $10 million. Thanks to her efforts to strengthen relationships with alumni, annual giving has grown 63 percent.

Robel has a high profile nationally. She is president–elect of the Association of American Law Schools.

But it is the internal law school changes that have been most meaningful to Robel. She can relate to young parents because she was one herself when she attended the school in the early ’80s. Recently divorced, she was raising a son and a daughter and holding down a job while pursuing her law degree.

In spite of the obstacles, Robel said she was undaunted. But then, she had a strong role model: her father, who entered college in middle age after serving in the military, including spending time as a prisoner of war in World War II.

“When you have a father who goes to college in his 50s, it sends the message that anything is possible,” Robel said.

She is grateful for the nurturing she received from faculty during her student days. She is amazed that they looked at her, a frazzled student and young mother, and saw a future professor. She has tried to offer the same support to students since she’s been on the other side of the lectern.

When she entered law school she had never even met an attorney. But her career path was decided during her childhood in Alabama in the 1960s. She was inspired by Frank Minis Johnson Jr., a federal judge who made a number of landmark civil rights rulings that helped end segregation in the South.

“I had such a strong sense of the law as a powerful force for good in people’s lives,” she said.

Robel has served on the board of Habitat for Humanity Indiana, has co-chaired IU’s United Way campaign and chaired the Bloomington Human Rights Commission.

She has been married for 28 years to Steve Thrasher and has three children and two grandchildren. She enjoys yoga and international travel. This fall she voyaged to Kathmandu, Nepal.

“There are plenty of places I’ve not been yet, and as far as I can tell they’re all interesting,” she said.•