Sphere of Influence: This airport executive led the financing for the new terminal and is shaping local economic development by attempting to increase nonstop flights into Indianapolis. Active in the industry on a national level, she is helping redefine aviation at a critical point in its history.

The aviation industry is in turmoil, and Marsha Stone is in the thick of it. But she wouldn’t have it any other way.

“I love the atmosphere, the environment, the energy. It’s just a sexy industry,” said Stone, 44, chief financial officer of the Indianapolis Airport Authority.

She led the financing for the $1 billion terminal that opened three years ago, an experience that she called “the opportunity of a lifetime.” It involved securing funding from the Federal Aviation Administration as well as arranging for six municipal bond issues. 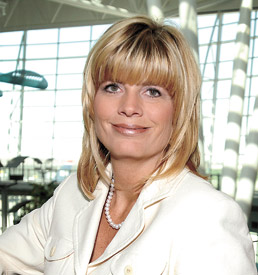 Then, last year she successfully negotiated a comprehensive and groundbreaking five-year use agreement with all the airlines that serve the airport. The agreement has been hailed nationally as a new approach to working with airlines as business partners.

In the midst of rising fuel prices and airline consolidation, Stone has the difficult charge of trying to lure more airlines here and increase the number of nonstop flights to Indianapolis.

Among her other responsibilities are overseeing human resources for the authority’s 550 employees and generating more revenue from concessions, parking and other sources. One of the more creative new revenue streams is a solar farm to begin construction soon on airport property. The 60-acre farm will be one of the largest of its kind in the country.

Stone is active in the industry nationally. Last year she chaired the Airports Council International-North America Finance Committee and continues as an official representative within the organization. That role will give her a voice in setting policy for the entire industry.

Stone never envisioned a career in the transportation field. She started her career as an auditor for George S. Olive & Co., and the airport was one of her first clients. She said the weeks she spent at the airport were always the highlight of her year. When a position opened up there, she jumped at the chance to apply. She served as a staff auditor, assistant finance director and finance director before being named CFO in 2008.

The job has taught her not to sweat the small stuff, which can be a challenge for financial types, she said. She used to spend hours on a problem that she later realized was not worth the effort.

“You have to learn to pull yourself out of the detail and not get lost in the trees,” Stone said. “I’ve learned to make sure you get policy and strategy right and try not to get bogged down in minutiae.”

Being CFO has given her new appreciation for how critical employees are to the success of the airport. She has introduced a number of initiatives to develop staff and recognize their achievements.

Stone is aviation co-chairwoman of the 2012 Indianapolis Super Bowl Host Committee, a member of the current class of the Stanley K. Lacy Executive Leadership Series, and a member of the IU Health West Hospital board. A lover of performing arts, she also sits on the board of The Cabaret.

Stone, a Hendricks County native, is single and has a daughter, Madison, 13, and a son, Mitchell, 10. To relax, she listens to music and practices yoga.•