The Indianapolis Marion County Public Library branch at 2822 E. Washington St. was one of five libraries in the city built with funds from the Andrew Carnegie Foundation. It was dedicated Nov. 14, 1911. 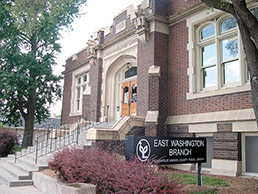 The East Washington Street library branch was one of five libraries in the city built with funds from the Andrew Carnegie Foundation. (Photo/Indianapolis Marion County Public Library)

According to the library system, “The architectural highlight of the building is two book gnome sculptures that perch above the front entry. Additional features include the original oak woodwork, circulation desk and two fireplaces.”

Carnegie grants helped build 164 libraries in Indiana, more than in any other state. One other Carnegie library remains in use in Indianapolis: the Spades Park Branch at 1801 Nowland Ave.

A centennial celebration for the East Washington Branch is planned for 1-4 p.m. Nov. 12. Activities include a magic show, balloon creations, a performance by the Arsenal Technical High School show choir, and a presentation by William McNiece of the Marion County Historical Society on the history of the library and Carnegie’s philanthropic efforts.