The debut of Gennesaret Free Clinics, which provides free health care to the homeless and uninsured population, was less than stellar. The three volunteers who comprised the medical team faced a tough audience.

“At first everyone looked at us like we were Dr. Frankenstein and we were going to be experimenting on them,” said Founder James Trippi, M.D., a cardiologist with The Care Group at Indiana University Health Methodist Hospital.

“We stood there for half-an-hour until one man finally came forward. We had to examine him on the floor while we were on our hands and knees. It was very humbling for everybody.” 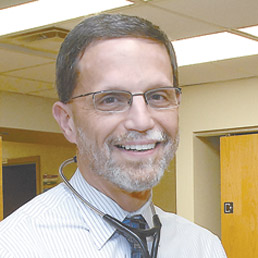 That was in 1988. Today, more patients are waiting in line than the organization can accommodate, despite now offering medical services in nine locations. The organization has expanded its services to include dental care, respite housing, vision care, social work services, medications and medical supplies, and screenings and preventive services, such as early detection for breast and cervical cancer. A few of its clinics have been spun off and are now operated by local churches.

A staff of 14, most of whom are engaged in providing direct patient care, and nearly 230 volunteers—physicians, nurse practitioners, nurses, pharmacists, dentists, dental hygienists and non-medical volunteers—make it all happen. Many volunteers have been with the organization for years.

Amy King, a radiation technologist with the VA Hospital, volunteered for a monthly rotation in Gennesaret’s mobile unit for five years, later serving as a substitute. “I think the organization is amazing,” she said. “They do everything they can to walk side-by-side the people to get them out on their own again.”

Gennesaret (pronounced jen-NES-sah-ret) comes from the Book of Mark in the New Testament. It refers to the area by the Sea of Galilee where Christ healed the sick. In 1988 the clinic recorded 2,000 patient visits. Now that number is more than 12,000.

Part of Gennesaret’s success is its decentralized approach to delivering health care. It opens clinics in homeless shelters and food pantries and takes health care services directly to patients in a recreational vehicle that operates as a mobile clinic. “They reach a neglected population that is really benefiting from their work,” said Jim Nation, executive director and co-founder of the Peace Learning Center. “Jim’s done so much for the community, but so many people don’t know about the work he’s done.”

According to Trippi, the entire Indianapolis community benefits. He cites the high incidence of HIV, tuberculosis and advanced chronic diseases among the homeless populations in New York, Boston and Washington, D.C.

“We don’t have that here,” he said. “It’s because we see these patients frequently and we do preventive health screenings. We catch things early. It’s really important for the health of the community as a whole to keep these folks healthy, because six months from now they will be in your schools, in your churches and in your neighborhood,” he added, referring to the transient nature of the populations Gennesaret serves.

Gennesaret’s Health Recovery Program, launched in 2000, provides transitional housing to men after major surgery or medical illness. Onsite caregivers in two homes on Central Avenue assist patients’ recovery, and additional services are in place to assist them in finding employment after they recover. “We are still the only organization in the State of Indiana that provides medical respite for homeless men coming from the hospital,” said Rebecca Seifert, executive director. Gennesaret is considering a similar program for homeless women.

Also on the drawing board: working with hospitals to help them treat Genneserat’s clients more effectively and at a lower cost, and figuring out a way to supply clients with durable medical supplies, such as hospital beds and wheelchairs.

None of that will happen unless the organization can pull in the approximately $1.3 million it takes to run the organization each year. Funding comes from thousands of individual donors, a bevy of grants, fundraising events and a trickle of government dollars. “It’s hard work to raise that much money every year,” Trippi said. “Just when I think we are going to have to start laying people off, miraculously the budget gets taken care of. Thank God there are really generous people who have been there for us every year.”

Trippi is amazed at how the organization has grown over the years. “When we started, it was a work of the soul,” he said. “We just wanted to do something to help out.”