One-year-old Elizabeth appeared to have a stomach virus, but her pediatrician found that she was experiencing liver failure. Her family traveled 100 miles by ambulance to Riley Hospital for Children with only the clothes on their backs. For the four months Elizabeth was there, the family made the Ronald McDonald House its home, knowing their presence would help Elizabeth’s healing process. “There just aren’t words to describe how much the house meant to us,” Elizabeth’s mom said. “God truly blesses our family through the Ronald McDonald House.”

Far too many parents experience a similar scenario. In 2010 the house provided 1,495 families with lodging and 2,860 families with day services. “Families come to us from almost every county in Indiana as well as several other states and countries,” said Brian Brunner, president of the board for the Ronald McDonald House. “For many families, we are their only alternative to sleeping in their car or on a chair in a noisy hospital waiting room.”

The Ronald McDonald House charges families only $15 per night, although the actual operating cost is $76 per night. Many families can’t even afford to pay that token amount, but no one is ever turned away for lack of funds.

Community volunteer Karen Campbell spearheaded the effort to open a Ronald McDonald House in Indianapolis. Her work paid off when the house opened in 1982 on the IUPUI campus within walking distance of Riley Hospital for Children. It could serve 24 families. In 1989 it more than doubled its capacity. “At that time we were the largest Ronald McDonald House in the world,” said Beth Johnson who has served as executive director for the house for the last 11 years.

In 2004, the Ronald McDonald House once again expanded, this time to Riley Hospital for Children, where it offers a day retreat area for families as well as six overnight sleeping rooms reserved for families with a child in the Critical Care Unit who need to be just steps away from their child. Both locations have living areas, stocked kitchens, laundry rooms, showers, quiet rooms and napping areas. Six apartments in the main location are designed to accommodate the special needs of transplant patients and their families. 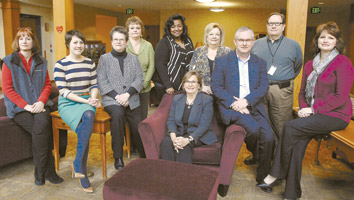 Despite its growth, the Ronald McDonald House can’t keep up with the demand for its services. “We open up every day with a waiting list of approximately anywhere from 20 to 30 families on any given day,” Johnson said.

The not-for-profit organization has an annual operating budget of $1.5 million that it raises entirely through donations and fundraising efforts. Most of its funding comes from private citizens, but corporations and, of course, the McDonald’s restaurant chain all pitch in. The organization employs 13 full-time and 10 part-time employees and depends on more than 300 volunteers to run the day-to-day operations. “They help us to reach out and maintain the kind of welcoming and homelike atmosphere we like to maintain for our families,” Johnson said.

One volunteer is Mark Imel, whose family was helped by the Ronald McDonald House in 2008. He works there every other weekend, helps with fundraising efforts and sponsors a room. “The house was there for me in my time of need, and now I just want to be there for it,” he said.