When Allison Transmission Holdings Inc. a year ago filed plans to go public, it said some of the proceeds would go toward reducing its billions of dollars in debt.

But in an updated filing with the Securities and Exchange Commisison Feb. 29, the company reversed course and said all of the more than $500 million that’s expected to be raised would go to its private-equity owners. 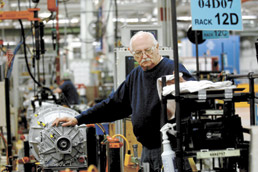 Allison employs 2,800 people, most at its Speedway headquarters and manufacturing complex. The company hopes to raise $500 million through its initial public offering. (IBJ File Photo)

Typically, companies staging IPOs sell primarily newly issued shares. But with Allison’s offering, all 21.7 million shares are held by Onex and Carlyle Group, the private-equity firms that bought Allison from General Motors Corp. for $5.6 billion in 2007.

That heavily leveraged deal has left Allison with a whopping $3.4 billion in debt.

“This offering is not going to benefit the company in any way, whatsoever,” said David Menlow, president of IPOfinancial.com in Millburn, N.J. He added that he’s seldom a fan of private-equity-backed IPOs.

The latest filing shows that the current owners paid an average of $8.44 per share. If the offering goes off at $24, they’ll pocket nearly three times as much.

But an executive at an Indianapolis private-equity firm said that, even without any debt reduction, Allison’s owners aren’t the only beneficiaries from the IPO.

“It opens the door to capital markets,” said Glenn Scolnik, chairman of Hammond Kennedy Whitney & Co. Future stock issues could be used to pay down debt or build new facilities, he said. “It could be a really good thing.”

The companies remain saddled with debt, which makes them more vulnerable to failure, after the private-equity firm exits the deal with its profit.

Leveraged buyouts like the one Onex and Carlyle Group executed with Allison have the potential to magnify returns to private-equity shareholders, said Steven Jones, associate professor of finance at Indiana University’s Kelley School of Business. “If the firm does well, they typically can generate a return on assets that’s higher than the cost of borrowing,” he said.

He thinks private equity draws criticism because the firms tend to invest in mature businesses, such as Allison, where more jobs are lost if a company fails. Venture capital takes greater risks, he noted, but the startups those firms invest in tend to employ fewer people.

The recession made the potential downside apparent at Allison, which employs about 2,800 people in making transmissions for bus and truck fleets. Most of the company’s workers are at its Speedway headquarters and manufacturing complex.

Credit-rating agencies in early 2009 downgraded Allison’s debt, which was more than $4 billion at the time. Moody’s Investors Service included Allison on a list of 283 companies, out of more than 2,000 it rates, that were most likely to default.

Allison posted a $323.9 million loss that year, but it also generated enough cash to meet its obligations and reduce indebtedness, the company noted in its prospectus to investors. The company further whittled down the debt just before the recent filing by applying $200 million of its own cash.

Allison returned to profitability in 2010, and last year its profit more than tripled, to $103 million on $2.2 billion in sales.

Scolnik thinks Allison is in a strong position to manage the $3.4 billion in debt.

The question is how the company will handle $2.6 billion in payments that are coming due in the following two to three years.

“They will need to redo these loans or generate a lot more operating cash flow,” Scolnik said. “That can be done without herculean effort because this company is very well-run.”

Allison’s private-equity owners have just begun their exit, which may take many more years, Jones said. After the IPO, Toronto-based Onex and Carlyle will have a controlling stake in the company, about 44 percent.

“So they don’t want this thing to fail,” Jones said.

Menlow said he’s not evaluating Allison only on the private-equity sale of stock.

“This is an issue that has myriad other concerns,” he said. “I have to say it depends on fuel prices. There are some concerns this may have a detrimental effect for the trucking business as a whole.”

Allison’s IPO is expected to price the week of March 12, according to data compiled by Bloomberg.•