Home » Next Purdue chief must cut costs but boost research 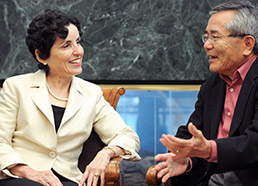 Purdue University’s past two presidents have been aeronautical physicists. For the school’s next act, it needs a tightrope walker.

The successor to France Cordova, who is stepping down this summer when her contract expires, will have to tip-toe between two almost contradictory demands: Cut costs for students yet spend more to ramp up Purdue’s research enterprise.

Purdue has been forced into this high-wire act because the recession has finally made American consumers cry “Uncle!” after two decades of galloping tuition hikes.

At the same time, state funding has been rising the past 20 years at less than the rate of inflation and then was cut in 2010 by Gov Mitch Daniels because of the recession.

On top of that, private donors were hammered by the 2008 stock market meltdown. And federal research funding, now that funds from the 2009 stimulus bill are gone, is starting to decline.

“Higher ed in general in this country is a business model that looks shaky,” Daniels told reporters in Lafayette on March 6—just seconds after voicing sky-high expectations for Purdue.

Indiana needs Purdue’s success more than ever. It is the state’s seventh-largest employer, with 15,000 workers, and its well-regarded programs in science, technology, engineering and computers churn out a steady stream of the workers employers want.

In addition, its professors’ research can produce the technical innovations needed to launch new high-value products and companies that have the best shot of reversing Indiana’s long decline, relative to the rest of the nation, in personal incomes.

Purdue’s search for a new president began last July when Cordova announced this year would be her last. The board hopes to name a replacement before Cordova’s term ends in mid-July, but the search could stretch beyond that.

Michael Berghoff, the Purdue trustee who chairs the presidential search committee, wouldn’t comment on the persistent rumors that Daniels or former Gov. Evan Bayh might be selected as Purdue’s next president. He merely noted that the nomination process was open to the public, and drew candidates from academia, industry and, yes, government.

The new challenges mean Purdue’s trustees are searching for slightly different skills than they were when they hired Cordova in 2007 or when they hired Martin Jischke in 2000, said Berghoff, a Purdue alumnus who is president of Lenex Steel Corp. in Indianapolis.

Cordova, 64, has managed to do both during her tenure. Her team found $45 million in spending reductions after Daniels cut higher education spending in late 2009. Those cuts increased to $67 million per year in 2011 after federal stimulus funding, which had masked state cuts in 2009, ran out.

Daniels has praised Purdue’s cost-cutting efforts, but his administration, the Commission for Higher Education and state legislators have kept consistent pressure on Purdue and other state universities to keep costs down and make sure more of their students actually graduate.

President Obama in January struck a similar theme, urging U.S. universities to keep their costs down and even proposing price caps.

Cordova said the challenge for Purdue, and for its next president, will be to become more efficient yet find new resources to keep the quality high, while also doing a better job of communicating why high-quality education is expensive to provide.

“We’re not a factory that just stamps out people that have read the rulebook on civil engineering,” Cordova said. “We just can’t lose sight of that.”

Cordova also has been a successful fundraiser, although in much quieter fashion than her predecessor Jischke. In five years, Cordova has raised $1 billion.

She did not have the advantage of a high-profile capital campaign. Jischke’s Campaign for Purdue, which raised $1.7 billion, ended just before she took office, making it unlikely another one would begin so soon. And the recession of 2008 and 2009 was much deeper than that of 2001.

Purdue’s endowment has continued to grow, reaching $2 billion for the first time in 2011, which ranks Purdue’s the 11th-largest among U.S. public universities.

Indeed, by most measures, Purdue is more successful than ever.

Its graduates were judged fourth-most desirable by corporate recruiters in an annual survey by The Wall Street Journal.

Its research spending is nearly $600 million a year, double what it was 10 years ago, and annual research awards have topped $400 million each of the past two years. Its invention and copyright disclosures hit a record 257 in 2010, the most recent data available.

The SAT scores of incoming Purdue students are higher than ever, and the school’s first-year retention rates have improved, auguring well for boosting Purdue’s overall graduation rate down the road.

“We have the highest profile students we’ve ever had. And the global engagement is something that’s just skyrocketed,” said Purdue Provost Tim Sands, highlighting two of the key features of the strategic plan Cordova put in place. “We’re now clearly a global leader in terms of U.S. institutions.”

Yet some of those achievements seem to have gone unnoticed publicly because Cordova has been far less visible around Indiana than Jischke was—particularly among politicians and business leaders.

To this day, Cordova is not widely recognized at the Indiana Statehouse. And when top leaders in the Legislature want to meet with a high-level Purdue official, it’s usually Keith Krach, Purdue’s board chairman, who handles it.

“On the next president, I would suggest: be more engaged with legislators,” said Sen. Ron Alting, R-Lafayette.

Nearly all state politicos have heard about the time, early in Cordova’s tenure, when she insisted that Alting come to her office first thing the next morning, rather than Cordova coming down to Indianapolis to meet him.

The incident became widely circulated—with Cordova being perceived as “elitist.”

Alting said the incident didn’t offend him, and said he’s always had a good relationship with Cordova. He praised her for being highly engaged in the university and in the Lafayette community. But he said Purdue’s next president should “be more engaged with legislators.”

“Martin had a connection with particularly those in leadership, particularly in House Ways and Means and on [Senate] Appropriations. That’s very, very important to develop that,” said Alting, noting that those relationships at least earned Jischke the courtesy of having legislative proposals that affected Purdue run by him before they were formally introduced.

Cordova, by contrast, got rough treatment from legislators when she presented Purdue’s budget requests in 2009. Even she acknowledges Purdue was “hard hit,” receiving an 8-percent cut in state funding that year and getting lectured on Purdue’s rapid tuition increases.

“I think it would have been to her advantage—and Jischke was the king at it—of really developing relationships and networks, on both aisles,” Alting said.

The Indiana business community expresses similar feelings about Cordova. Serial entrepreneur Pete Kissinger, who is also a Purdue chemistry professor, said Jischke was focused on “outside” issues like engagement while Cordova has focused more on “inside” issues like student success and diversity.

“Martin Jischke is gregarious, remembers names and lights up a room. He was the Teddy Roosevelt of Purdue in all ways but the eye glasses,” Kissinger wrote in an email. “They are different personalities and the times are different too.”

Cordova said she’s gotten better over time working with politicians and business leaders. But she acknowledged that she has focused her efforts in different ways than Jischke did.

“You have to pick and choose the things to focus on. You have so much time,” Cordova said. “In my view I think I’ve gotten better as time has gone on.”

Perhaps Cordova’s biggest legacy will be her efforts to find new sources of revenue for Purdue, to help it keep growing even as tuition revenue and government funding failed to keep pace.

Under Cordova, Purdue has boosted its percentage of out-of-state students from 40 percent to 50 percent. That’s significant because out-of-state undergraduate and graduate students pay nearly three times as much in tuition and fees—more than $27,000 apiece—than do Hoosier residents.

Cordova’s globetrotting also has opened up two other avenues for revenue: foreign students and selling online course materials to foreign schools and their students.

Purdue already ranks No. 4 among U.S. public universities for number of international students. And it has quietly been testing nanoHub, an online courseware program in which Purdue’s experts in fields like nanotechnology deliver instruction over the Internet.

The trimester plan Purdue launched in January is expected to generate $40 million for the university by making better use of its facilities and faculty.

In January, Purdue launched an Innovation and Commercialization Center, which will serve as a single point of information for venture capitalists and corporations interested in learning about Purdue’s technology. The center will have a budget to fund the building of prototypes and other efforts designed to advance research to a stage where investors are more likely to commit funds.

And in just a few weeks, Cordova said, she will name the leader of a new applied research corporation, which Purdue has formed to allow its professors to do contract research for federal agencies or private corporations, without compromising the intellectual property rights of those outside entities.

“She’s done her successor a favor. There are a lot of tough choices in there, and she’s made them,” said Moreau, noting the cultural resistance to things like the trimester plan or greater online education.

“It’s bold, it’s aggressive, and I think she’s done a big, big favor, by getting this going.”•