Some companies boomed, however, and MaxIT Healthcare LLC led the way.

Biomet was among a handful of the state’s largest companies whose revenue trended sideways.(IBJ file photo)

Only about 75 of the company’s 1,100 employees are in Westfield. Most of the rest are scattered around the country helping medical offices implement the systems, particularly as hospitals absorb clinics or doctors’ offices.

MaxIt could see strong growth for several more years, Sweeney predicted, because there is no sign the rush to improve technology will end anytime soon. One reason is the federal push to reward health care providers for quality of care rather than the amount provided; thus providers have incentives to track patient health.

One firm made hay from a crisis among competitors.

Independent Stationers sales shot up 36.6 percent, to $239 million, as the members scooped up customers from Office Max, Office Depot and other big-box office suppliers. Both consumers and commercial customers are defecting from the big boxes to discounters and online retailers.

Cutbacks at the chains have hurt customer service—the specialty of Independent Stationers members, said the company’s CEO, Mike Gentile. Service is particularly important to the small and midsize businesses the members cater to. 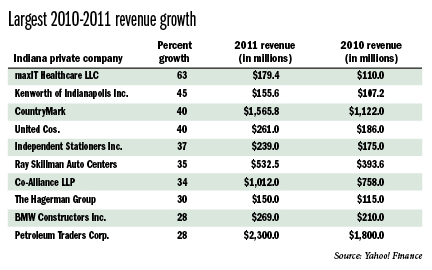 • One CountryMark shareholder, Avon-based Co-Alliance LLP, relied on rising diesel fuel prices for part of its 34-percent increase in revenue. Co-Alliance, which sells diesel not only to farmers but also to commercial fleets, crept across $1 billion in sales last year.

Co-Alliance also benefited from increasing prices in other commodities—corn and soybeans, noted CEO Kevin Still. Not only did the value of each bushel increase, but lucrative prices also prompted farmers to spend heavily on fertilizer and seed, further ratcheting up Co-Alliance sales. 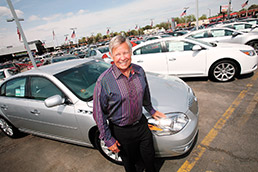 Moreover, the price of genetically altered seed has increased 30 percent in the past five years as additional traits such as insect residence were added.

The improving economy lifted some of the state’s biggest auto dealers.

Ray Skillman Auto Centers, an Indianapolis-based dealer, saw revenue climb 35 percent, to $532.5 million, due to a brightening market, but also because the company streamlined several Indianapolis-area acquisitions, said Cory Delp, a Skillman general manager on the south side.

Some contractors had good years, too.